WONDERFUL LIFE "POPS UP" IN UNION 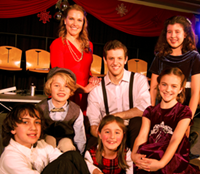 The Theater Project will recreate the Lux Radio Theater circa 1947 as twelve actors, a musician and one extremely overworked sound technician prepare for the big radio broadcast of the story made famous in the Frank Capra film of the same name. Audiences experience the tears and laughter of WONDERFUL LIFE performed live, along with the novelty of seeing the backstage mechanics of an old-time radio broadcast. They can also participate in a pre-show holiday sing-along at 1:45 just before the show.

“This story about friendship and small acts of kindness seems to become more and more popular every year,” says Mark Spina, Artistic Director of The Theater Project. “For many of our patrons, kicking off their holidays with this event has become a holiday tradition. We’re hoping to meet some new people from Union and at the same time, introduce our “regulars” to the great shops and restaurants in the downtown shopping district.” The Theater Project has added a directory of Union Center eateries to its web site.