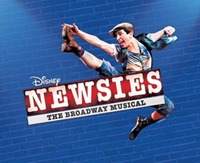 This Holiday Season Centenary Stage Company is set to “seize the day” with their family holiday spectacular production of Disney’s Newsies The Musical.

Set in New York City at the turn of the century, Newsies is the rousing tale of Jack Kelly, a charismatic newsboy and leader of a ragged band of teenaged "newsies," who dreams only of a better life far from the hardship of the streets. But when publishing titans Joseph Pulitzer and William Randolph Hearst raise distribution prices at the newsboys’ expense, Jack finds a cause to fight for and rallies newsies from across the city to strike for what’s right.

Newsies is inspired by the real-life "Newsboy Strike of 1899," when newsboy Kid Blink led a band of orphan and runaway newsies on a two-week-long action against Pulitzer, Hearst and other powerful newspaper publishers. Timely and fresh, the fictionalized adaptation of Newsies addresses age-old themes of social injustice, exploitative labor practices and David-versus-Goliath struggles as the young learn to harness their power against a corrupt establishment. High-energy with non-stop thrills and featuring eight brand-new songs by the original team of Menken and Feldman while keeping many of the beloved songs from the film, including “Carrying the Banner,” “Seize the Day,” “King of New York” and “Santa Fe.”

Featuring a cast of over 50 performers from across the tri–state area, Centenary Stage Company’s production of Disney’s Newsies is directed by broadway, film and television Michael Blevins.  Blevins has appeared in several Broadway productions including Bring Back Birdie, Neil Simon's Little Me, and The Tap Dance Kid in which he created the role of Winslow Alexander. He has appeared in the Tony Awards Show, as well as many other television shows, feature films and TV commercials, is widely known for his portrayal of Mark in Sir Richard Attenborough's film A Chorus Line, and is also featured in Chaplin. He is also the director of the new Musical Theatre Works Academy.  He has worked with many noted directors and choreographers, among them Danny Daniels, Bob Fosse, Woody Allen, Vivian Matalon, Joe Layton, Lynn Taylor-Corbett and Peter Gennaro. He has choreographed music videos for Amy Grant, five national commercials as well as the off- Broadway production of The Mad Forrest, and his own show, the Musical Count to Ten at New York's Musical Theatre Works.  Blevins also serves as director of Centenary Stage Company’s Young Performers Workshop.

The 2017-2018 season of performing arts events at the Centenary Stage Company is made possible through the generous support of the Geraldine R. Dodge Foundation, the NJ State Council on the Arts, the Shubert Foundation, the Blanche and Irving Laurie Foundation, the Sandra Kupperman Foundation, and CSC corporate sponsors, including Premier Season Sponsor Heath Village Retirement Community, The House of the Good Shepherd Silver Sponsors Hackettstown Medical Center, Home Instead Senior Care (Washington),  and Fulton Bank of New Jersey, and Centenary Stage Company members and supporters.