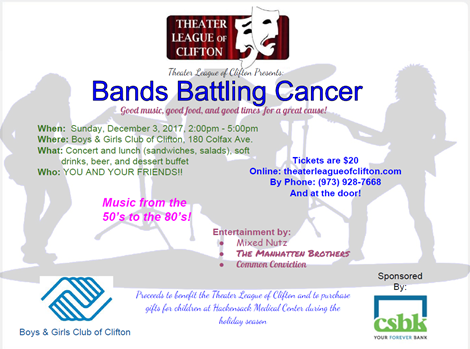 WHEN: Sunday, Dec. 3, 2-5 p.m.
WHERE: Boys & Girls Club facility, located at 180 Colfax Ave. in Clifton
TICKETS: $20 per person and includes lunch (sandwiches and salads), dessert buffet, soda and beer. Tickets may be reserved by phone (973-928-7668); online via the theater’s website or regular mail—payment by check only. Tickets also will be sold at the door on the day of the concert. The Theater League of Clifton’s mailing address is: PO Box 4072, Clifton, NJ 07012.

The program will feature three local bands—Mixed Nutz, The Manhatten Brothers and Common Conviction—performing rock and roll and pop music from the 1950s to the 1980s.

Proceeds from the event will to go to support the Theater League of Clifton and to purchase presents for children at Hackensack Medical Center during the upcoming holiday season.

Founded in 2005, the Theater League of Clifton is a non-profit organization dedicated to fostering an appreciation of the arts through theatrical performances, while providing quality entertainment for all ages. The group welcomes volunteers in all aspects of performance and production. The organization recently concluded its fall main-stage production of the musical “Thoroughly Modern Millie.”