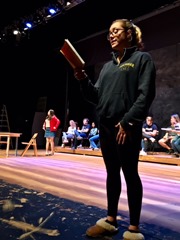 WHEN: Thursday, Friday and Saturday, November 16, 17, 18 at 7:30 PM
WHERE: The Collins-Tall Auditorium, 19 Columbus Drive, Tenafly, NJ
TICKETS: $12 for adults, $10 for students/ seniors. To purchase tickets visit: www.tenaflytheatre.com or buy at the door. For more information or to request an interview, email: sahncooper@tenafly.k12.nj.us

As its annual fall play, Tenafly High School is proud to present Our Town—Thornton Wilder’s Pulitzer Prize-winning drama about the fictional small town of Grover's Corners, New Hampshire, at the turn of the century. It has been cast and directed by Tenafly High School Theater Director Samuel Ahn-Cooper, who has added many contemporary touches, including musical numbers, costumes, untraditional casting and increased audience interaction. (Image: The Stage Manager, played by Lizzy Palo)

Set over the years between 1901 and 1913, the 3-act play explores the everyday, ordinary lives of the people of Grover’s Corners, told through the voice of a central, omnipotent narrator/stage manager, who frequently interrupts the play to recite monologues and speak directly to the audience as she reflects on the comedies and tragedies of life, as well as metaphysical questions about life, death and eternity.

The first act introduces the audience to the daily life of the people of Grover’s Corners. The second, three years later, centers on the wedding of two of the main characters, George and Emily, who are conflicted about their decision as they feel a bit unprepared for the future that awaits them; and the third act, nine years later, focuses on how much life has changed in this small town. Many of the people have died, including Emily, who returns to Earth for one day to relive her 12th birthday, only to reach the painful conclusion that people really don’t realize the beauty of life while they are living it.

“The beauty of Our Town is that many of the plays themes are still relatable,” says Samuel Ahn-Cooper. “We are so wrapped up in the haste of our daily lives that we never stop to look at things and each other. We take life for granted and then it is gone. As wonderful as the play is, it is very dated and I feel that it works better with a more diverse cast, some contemporary updating and having some of the roles traditionally played by men being played by women. We are enjoying the process of taking a well-known play and really making it our own. It is great to work with such an open, beautiful cast that is willing to take the journey towards one common goal.”