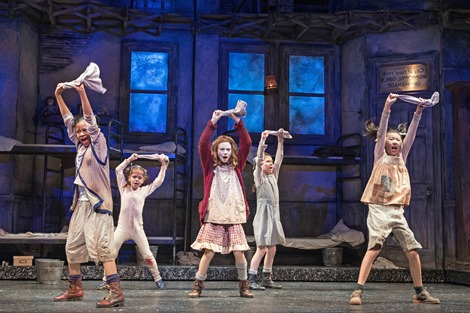 In the tradition of their previous holiday shows—think the recent productions, Elf! and A Christmas Story—the Paper Mill Playhouse has given the theater-going public a delicious bonbon of an American musical, Annie, in a crisply acted, inventively staged production that brings the 1930’s cartoon to life.

Set in the depths of the Great Depression, the book by Thomas Meehan follows the red-headed funny-papers heroine as she flees a Dickensian orphanage in an attempt to find her parents, gets invited to spend Christmas with billionaire Oliver Warbucks, meets many famous people (Justice Brandeis, Henry Morgenthau and FDR, among others) and ends up being adopted by the gent.

From its almost disastrous 1976 debut at the Goodspeed Opera House in Connecticut, Annie has had a wondrous career: a long Broadway run, two sequels, three movie versions, numerous national and international tours, major revivals and two previous productions at the Millburn playhouse in 1983 and 2002. From Annie’s opening number, an anthem to the hope embodied in “tomorrow,” to a rousing paean to New York City, Annie continues to elicit audience sing-alongs to Martin Charnin’s now-familiar lyrics set to the music of Charles Strouse. 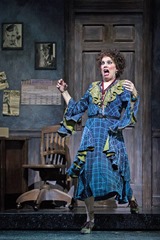 A multicultural group ofadorable orphans (Gabby Beredo, Tessa Noelle Frascogna, Michelle Henderson, Eve Johnson, Lauren Sun and Sloane Wolfe) steal every scene in which they appear, whether they’re bemoaning their hard-knock life, reminding us that we’re “Never Fully Dressed Without a Smile” or bedeviling the nasty orphanage director, Miss Hannigan. Portrayed by a stellar Beth Leavel (right) with a thick New Yawk accent, she quivers with palpable malevolence toward her charges (“Little Girls”), drunkenly staggers around stage and, with her brother Rooster (goofy Cooper Grodin) and his blonde sidekick (ditzy Kim Sava), gleefully anticipates the success of a scheme that will land the trio on “Easy Street.” She appears to be having a grand time portraying the play’s villain!

Christopher Seiber (left, with Annie and Grace)is spot-on as Oliver Warbucks, the dignified businessman whose corporate heart is melted by the little redhead who shares his home for the holidays. His rendition of “Something Was Missing” is especially poignant, and he executes some nifty footwork in “NYC.” Appearing as Annie at Sunday night’s performance, Cassidy Fry exhibited a fine set of pipes (although the sound system made her sound rather tinny); however, her stilted delivery sounded unnatural. Of course, no real kid says, “Leapin’ Lizards,” but Fry sounded more like she was reciting lines than conversing with the other characters. Perhaps she’ll relax a bit and sound more real as the run progresses. Erin Mackey’s Grace Farrell (Warbucks’ gal Friday) provides able support in musical numbers with Seiber and Pry and offers strong encouragement to Annie in the yearning “Maybe.”

The actors who portray FDR (Kevin Pariseau) and his cabinet may not have much to do, but they add to the verisimilitude of the situation. And let’s not forget Annie’s pet dog, Sandy (left); a calm and adorable Macy draws “oohs” and “ahhs” every time he appears—which is not nearly enough!

Kudos, as usual, go to the production staff. Beowulf Boritt has designed a set that morphs from gritty orphanage to the decrepit Hooverville shantytown under the Brooklyn Bridge (to remind us that this is the Depression) to Daddy Warbucks’ grand mansion, seamless changing scenes in the blink of an eye. Leon Dobkowski’s costumes and Leah J. Loukas’ wigs and make-up are reminiscent of the time and, in the case of Miss Hannigan, of the cartoon strip. Charlie Morrison’s lighting and Randy Hansen’s sound add to the atmosphere. Joann M. Hunter’s choreography is nimbly executed by the actors; the orchestra directed by Jeffrey Saver provides great accompaniment but never overpowers the singers.

My one complaint is that the volume in general is too loud, making our ears hurt and everyone sound the same, no matter where they are situated onstage. Taking it down a level will make the singing sound less tinny and strident (especially Pry’s) without spoiling the performance.

A quintessential New York Christmas story, Annie is the perfect antidote to incessant talk about Russia, health care and taxes. So bring the entire family—ages 5 to 85—to Millburn for a tuneful dose of optimism and holiday cheer. It’s the best medicine!

Annie will be performed at the Paper Mill Playhouse, 22 Brookside Drive, Millburn, through December 31. For information and tickets, call the box office at 973.376.7676 or visit www.papermill.org online.

Photos by Evan Zimmerman for MurphyMade