REVIEW: LIGHT OPERA OF NJ KICKS OFF SEASON WITH PASTICHE OF GILBERT & SULLIVAN OPERETTAS DELIVERED WITH TALENT, WIT AND STYLE

Gilbert and Sullivan has been a staple of the Light Opera of New Jersey since its inception as Ridge Light Opera 20 years ago.

This season’s kick-off show, Pattermania, which opened Friday, Nov. 3, continues that relationship in a brand new way. The show is a review consisting of abbreviated versions of The Mikado and The Pirates of Penzance which follow a first act made up of music from several G&S shows bookended by an exuberant and comically forgetful version of “I am the Very Model of a Modern Major General,” performed by comic baritone David Simon. As Simon searches in vain for rhymes in that quintessential G&S patter song, the rest of the cast performs a series of songs from the G&S canon.

Performed in the sanctuary of St. Mark’s Episcopal Church in Basking Ridge, the home turf of LONJ, the show features a necessarily spare set augmented by a slide show of cartoons from 19th Century G&S productions, photos from past LONJ show and some random artwork that matches the songs, occasionally comically.

Since comedy is the rule in G&S, it is easy to overlook the native talents of the cast. But the ensemble put together by producer/director/master of ceremonies and occasional performer William Corson are consummate performers.

Of special note is Suzanne Karpov who recently made her Carnegie Hall debut in Poulene’s Gloria. She has received praise from reviewers on both coasts for a soprano described as “elegant,” “incisive and tender” and “angelic.” She demonstrated all those characteristics as well as excellent comic timing in her turns as YumYum in The Mikado and Mabel in Penzance as well as during the review portion of the show.

Kevin Grace combined his strong baritone with the perfect pirate’s glint in his eyes as the Pirate King and Cameron Smith demonstrated a sturdy tenor as Nanki-Poo.

This is not to downplay any of the cast. As usual, Corson pulled together the best possible performers for his show and made a couple of cameos himself, notably in a hilarious tussle with the delightful comic baritone James Mills as Ko-Ko, the Lord High Executioner, looking for someone to behead.

Two “old standbys” in the cast, long-time members of the LONJ ensemble, proved they never lose their enthusiasm for G&S.

Joanna Hoty Russell, an exuberant Ruth in Penzance, demonstrated her versatility in many of the songs in Act I, is not only a superb mezzo-soprano, she also handled the projection design for the show. Hoty Russell is president of the production board of LONJ and has been part of the group since 1998. 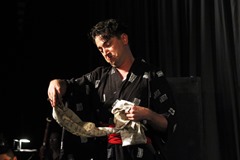 The ever-versatile (and recently slimmed-down) John Lamb proved once again there is nothing he and his dynamic bass can’t handle. He was The Mikado as well as the Sergeant in Penzance and in many of the songs in Act 1. Lamb is a founding member of LONJ and has appeared in many productions. His bio in the program lists credits “from deities and emperors to armchairs and trees.”

Working with a spare stage and fairly simple costumes, each performer created the proper mood for every song. The orchestra, under the direction of Lucas Barkley, handles the cramped quarters beautifully.

Corson, from a stool in front of the orchestra, occasionally filled in gaps in the plot of the two extremely truncated shows, but mostly, the cast carried the production on their own.

The professionalism and stunning voices have come to be expected by frequent visitors to LONJ, but a first-timer in the audience was amazed at the performance and how well the cast used the small space.

The show has two performances today, Saturday, Nov. 4, at 2 p.m. and 8 p.m. with tickets available at the box office. There is parking behind the church and on the street. The church is handicap-accessible.

With the recent passing of Sheila Abrams, the NJ Arts Maven blog found itself without a music and dance critic Jane Primerano has signed on to review music events.

Jane is a long-time reporter, photographer and editor in North West New Jersey. Long a fan of the arts, she has written occasional reviews for The Express-Times in Easton, Pa, but has more often been a “sidekick” to the late NJArtsMaven reviewer Sheila Abrams, whose shoes she can’t hope to fill as a reviewer. Jane sings with Warren County Community Singers in Washington, NJ, and with the choir of The Episcopal Church of St. Luke and St. Mary in Hope and Belvidere, NJ, and is a former member of Twin-Rivers Choral Society in Easton, Pa. She confines most of her journalism to covering agriculture and agri-business issues for trade publications.