CONCERTS BY PIPES OF CHRISTMAS TO MARK 1879 KNOCK VISION 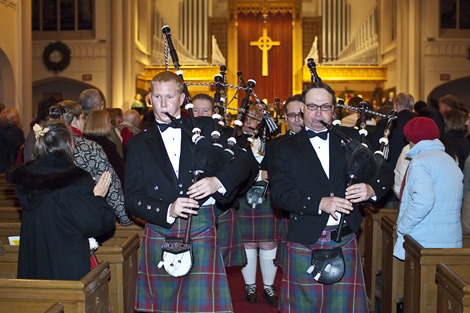 WHEN: Sunday, December 17, 2 PM & 7 PM (The 2PM concert in Summit is now SOLD OUT)
WHERE: Central Presbyterian Church located at 70 Maple Street in Summit, NJ

Tickets may be purchased online exclusively through SmartTix at www.smarttix.com  or by phone at (212) 868-4444. Reserved patron seats are available at both venues. (Above: Pipers from the Kevin Ray Blandford Memorial Pipe Band are returning to the East Coast this December to join the company of the 19th annual “Pipes of Christmas” concerts. Photo by Warren Westura.)

The Pipes of Christmas will celebrate its nineteenth season with performances in New Jersey and New York this December.

The 2017 production will mark the world premiere of Beautiful Things, an original composition by acclaimed Celtic harper Cormac de Barra (RIGHT) of Dublin, Ireland. The piece commemorates the vision of the Virgin Mary at the Knock Parish Church in Knock, Ireland on the night of August 21, 1879. Earlier this year, the remains of John Curry, the last remaining witness to the vision, were reinterred at Old St. Patrick’s Cathedral in New York City from the pauper’s grave where he was laid to rest in 1934. His Eminence Timothy Cardinal Dolan, Archbishop of New York, supervised the service.

For those weary of the ceaseless stream of secular seasonal music from department stores to TV, the Pipes of Christmas offers a spiritual and traditional take on the season that connects concertgoers to the holiday in a fresh, meaningful way. The show features tunes such as O Come, O Come Emmanuel, Joy to the World, and Amazing Grace, all performed live on pipes and drums, harp and fiddle, and organ and brass. Not only does the performance define Christmas cheer but also it inspires those of Celtic descent to retrace and reconnect to their ancestry.

Proceeds from the concert support an extensive music scholarship program, which includes the Carol Hassert Memorial Fine Arts Scholarship at Summit High School in Summit, NJ as well as annual gifts to the National Piping Centre and the Royal Conservatoire of Scotland (both located in Glasgow, Scotland) the Gaelic College of Nova Scotia and Lyon College in Batesville, Arkansas.

Proceeds also support the Society’s sponsorship of the US National Celtic Harp Championship, the Gaelic Literature Competition at Scotland’s Royal National Mod and an annual academic research prize at Sabhal Mòr Ostaig, the acclaimed Gaelic college on the Isle of Skye.

Named one of New York City’s “Top Ten” holiday events, the concert is made possible by a generous gift from the Grand Summit Hotel in Summit, NJ and Aberlour Single Malt Whisky.

Each year, concert highlights are webcast in hi-definition over the Christmas holiday to a global audience. The 2016 production was the recipient of the prestigious Telly Award for broadcast excellence.

The concert has been lavished with critical acclaim. In his review for Classical New Jersey Magazine, Paul Somers wrote, “The whole evening was constructed to introduce gem after gem and still have a finale which raised the roof. In short, it was like a well constructed fireworks show on the Glorious Fourth. The Westfield Leader described the concert as “a unique sound of power and glory nowhere else to be found.”