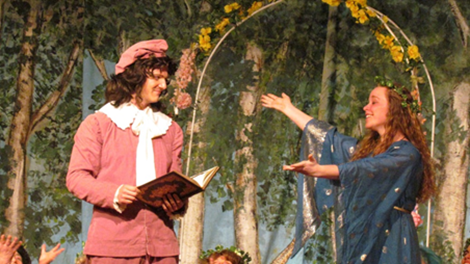 To commemorate their 80th Anniversary, they are performing Iolanthe, which was the very first production that the company ever performed.

Ridgewood Gilbert & Sullivan Opera Company was founded in 1937 by Kay and Jack Edson and Oliver and May Hall, after the Radburn Singers had decided to stop producing the operas of William S. Gilbert and Arthur Sullivan. The company’s first show, Iolanthe, opened on November 25, 1937, Thanksgiving Day and the 55th anniversary of the premiere performances of Iolanthe in London and New York, at George Washington Junior High School. Tickets were only $1 to see the fully staged show performed with an orchestra.

A few years after the company’s opening, the United States’ participation in World War II led to a resulting gasoline shortage. Since significantly fewer patrons could come to Ridgewood to see the shows, the company started bringing their show on the road to other communities in the area. This business model proved so popular that it has been maintained ever since and is still now, in fact, an integral part of the rehearsal and performance schedule. Ridgewood G&S has performed as far away as upstate New York, New York City, Connecticut, southern New Jersey, and Pennsylvania. Most such performances, some fully staged and some in concert, are sponsored by outside organizations that pay a modest fee and sell their own tickets (or provide free admission as a community service).

Ridgewood Gilbert & Sullivan provides free concert versions of the shows to senior citizens at retirement homes and libraries throughout Northern New Jersey and Rockland County, NY. The concerts serve as fundraisers to help the company produce their upcoming shows. Of course, Ridgewood G&S has never forgotten its local supporters either, and always gives at least two full shows each season in Ridgewood.

With one production every spring and fall since November 1937, Ridgewood G&S has given approximately 1500 performances featuring over 800 singers in dozens of communities in the Tri-State Area and beyond. The company took great pride in being invited by the International G&S Festival to take its productions of The Grand Duke in 2010 and HMS Pinafore in 2011 to Gettysburg, PA, where it competed successfully against other G&S companies from around the world.

The company consists of a large group of people ranging from as young as 16 to early 80s. Every year, there's 1 or 2 people who perform with the company for the first time, and other company members have been performing on-and-off with the company since the 1970s and 80s. What brings these people together is their ability to sing and their desire to perform Gilbert & Sullivan. Several of the company members are professionally trained in singing operetta, though the company considers itself a community theater group and encourages singers of all levels to audition for its chorus.

By following D’Oyly Carte tradition, Ridgewood G&S has produced the operas in a manner which would certainly have met with the approval of Gilbert and Sullivan themselves. The title character of Iolanthe has reached an age of “a couple of centuries or so,” and although Ridgewood G&S still has a way to go to achieve that claim, the success of its first 80 years certainly has it headed in the right direction.