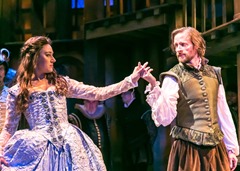 If you’re wondering why someone thought it a good idea to turn a beloved Oscar-winning film into a stage production, the answer lies in the nature of live theater: Instead of merely watching large-scale figures enact a story on a huge movie screen, the audience enters a real world unfolding before them and experiences real people interacting with one with a patently palpable immediacy. (Left: Jon Barker and Whitney Maris Brown)

With Shakespeare in Love, which Lee Hall has adapted for the stage from a screenplay by Marc Norman and Tom Stoppard, the Shakespeare Theatre of New Jersey has mounted one of the finest productions I have seen there in my 21 years reviewing the troupe. Infectious exuberance, sheer cheekiness, acerbic wit and superb acting make the very air in the F.M. Kirby Shakespeare Theatre crackle with an electrical charge that leaves us giddy and craving more. 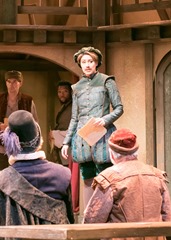 Above all, Shakespeare in Love is what we’d call a “meta play”: a play about the theater and the act of creating for it. Essentially, it recounts how Will Shakespeare, a novice playwright from the provinces (where he left a wife and twins), came to write his great tragedy, Romeo and Juliet. Suffering from a bad case of writer’s block and attempting to meet his obligations to theater owners Richard Burbage and Philip Henslowe, he produces no script until he encounters his muse, the freedom-loving proto-feminist Viola de Lesseps, a wealthy merchant’s beautiful daughter who loves theater so much that she disguises herself as a young man so she can appear onstage (right). Complications involving forbidden love, her impending marriage, competing business interests and disgruntled actors ensue, much to our merriment. 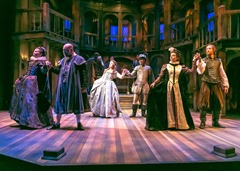 STNJ Artistic Director Bonnie J. Monte has directed this “theatrical love letter” (here in its first Northeast production) with verve and style, keeping the action moving so engrossingly that the two and three-quarter hours pass swiftly by. Too, no detail to transport us to late 16-century London has been overlooked. Nikki Delhomme’s costumes (left) are true to the period (check out the sleeves that lace onto doublets and bodices), with sumptuous fabrics and design elements appropriate to the social classes of those wearing them. Kris Kukul’s evocative music and the period dances staged by Danielle Liccardo enhance the experience. And the literate script is sprinkled with quotes from other Shakespeare plays that you’ll recognize and smile at their incorporation into the clever dialogue. 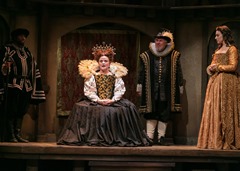 But it’s the large cast that does the heavy lifting in Shakespeare in Love. With spot-on comedic timing and oversized stage presence, Jon Barker is a stellar Will Shakespeare, trying to juggle the competing demands of Burbage and Henslowe (played by the always wonderful David Andrew MacDonald and Edmond Genest, respectively), the irritating creditor/investor Fennyman (an appropriately nudgy Ames Adamson) and his burgeoning desire for Viola, played by the luminous Whitney Maris Brown in her first season with the troupe (I hope we’ll see more of her in the future). Even when she’s standing behind a crowd of actors, we can’t help but notice her. 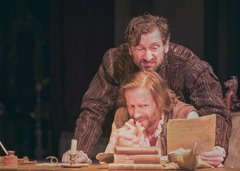 Anthony Marble’s sly Kit Marlowe (left, with Barker) is a worthy competitor to Shakespeare; the script even addresses the authorship question by having Marlowe contribute several lines to a sonnet the budding Bard is writing! Erika Rolfsrud is marvelous as Viola’s Nurse and Queen Elizabeth (above, with Brown), one a nattering busybody and the other a woman in a traditional man’s job; we can even forgive the sovereign’s extreme predilection for dogs (reminiscent of the current queen)! And Marcus Dean Fuller makes the most of perhaps what is the least sympathetic role, that of Wessex, Viola’s moneygrubbing nobleman suitor who sees their union as more merger than marital. Patrick Toon is to be commended for his drumming as is Garrett Lawson for his hammy Ned Alleyn, the actor cast to play Tybalt in Romeo and Juliet. The rest of the large cast portrays courtiers, players and servants to provide fine support. The set designed by Brin Clinnin is a marvel—highly reminiscent of what we imagine an Elizabethan stage to be. A box that slides in and out from under a platform serves as a bed and a boat! Props are carried on and off or are moved around to suit the action. Kudos, too, to the dressers backstage who manage quick costume (and in one case, makeup) changes in the blink of an eye. Rick Sordelet’s fight direction features some nifty swordplay, too. (Above: Barker and Genest) 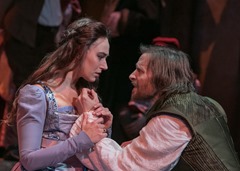 Onstage at regional theaters all across the nation, Shakespeare in Love has the distinction of being the most produced play this year. If you, as I do, love plays about the theater, are curious about how dramatic creation comes about and can’t resist a good love story, then you won’t want to miss Shakespeare in Love at the Shakespeare Theatre of New Jersey in Madison where you can travel through time and space to experience one of the most exciting periods in theatrical history. Not a bad deal for the price of a ticket! But hurry, you can only do it until November 12.

Shakespeare in Love will be performed at the F.M. Kirby Shakespeare Theatre on the campus of Drew University in Madison through Sunday, November 12. For information and tickets, call the box office at 973.408.5200 or visit www.ShakespeareNJ.org online.