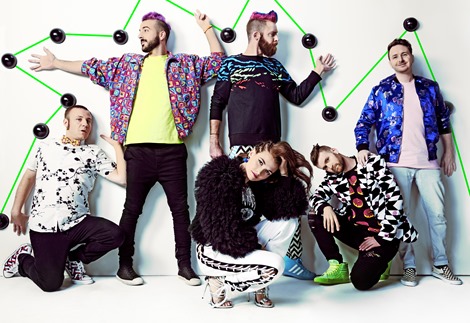 Born and raised in the creative crucible of New York City, MisterWives are the latest genre-defying band to break out of the city that never sleeps and gain recognition on a global stage. MisterWives takes their critically acclaimed live show to the Jersey side of the Hudson to White Eagle Hall in Jersey City, one of the most intimate venues they’re playing on their current Connect the Dots Tour.

MisterWives (their name flips genders of the polygamy term, ‘sister wives,’) debuted at the Canal Room in NYC in 2013, soon followed by their critically acclaimed first album Our Own House and a massive global tour that had the band playing high-profile concerts and major festivals, such as CMJ Music Marathon, Lollapalooza, Outside Lands, Hangout Fest, LouFest, and Austin City Limits. "The last few years have definitely been the best kind of whirlwind you could ask for!" says Will Hehir ,bassist. "We've been so lucky to get to play live for amazing audiences all around the world, develop musically as a band and grow even tighter than any of us ever thought possible.”

Connect the Dots, the band’s new record released this year, reveals an indie band evolving on all fronts. “This record lyrically and sonically goes in so many different directions, which is how the concept "Connect The Dots" came to fruition,” says Mandy Lee, singer. “Our existence is made up of so many different variables that we are constantly trying to piece together and make sense of. At times it might just look like a jumbled nonsensical mess of numbers and dots but in actuality each piece is crucial to completing the picture."

In addition to Lee and Hehir, MisterWives includes: Marc Campbell (guitar), Jesse Blum (keyboards, trumpet, accordion) and Mike Murphy (Saxophone). White Eagle Hall is the only Garden State stop on the band’s Connect the Dots Tour. It is also one of the smallest venues on their current itinerary, giving fans a rare chance to still experience this fast-rising group in an up close and personal setting.

Opening for Misterwives at White Eagle Hall are Smallpools, LA-based band (although some members are New Jersey natives) whose first single, Dreaming charted at number one on The Hype Machine, and Vinyl Theater, who hail from Milwaukee and are supporting their new record, Origami.