LSO OPENS SEASON WITH “AN EVENING OF FANTASY” ON SATURDAY 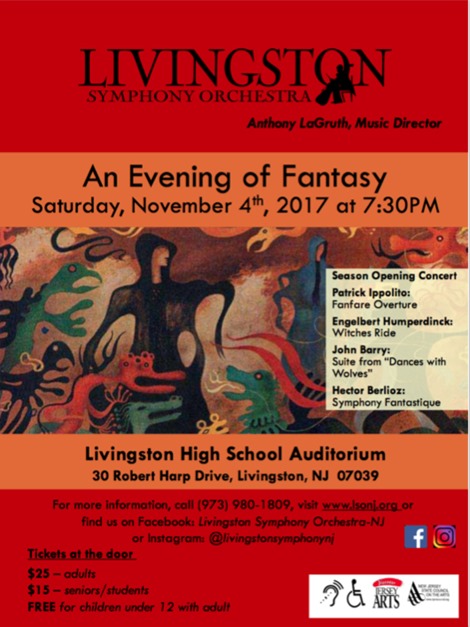 An Evening of Fantasy

WHEN: Saturday November 4, at 7:30pm
WHERE: Livingston High School Auditorium, 30 Robert Harp Drive, Livingston
TICKETS: $25 for adults, $15 for seniors and students, and free for children under 12.
For more information on this evening, please visit www.lsonj.org  or call (973) 980-1809.

The Fanfare Overture composed by Rick Ippolito, has a special significance to our illustrious Maestro LaGruth. The work is “Dedicated to Anthony LaGruth and the Garden State Philharmonic in Commemoration of Maestro LaGruth’s 5th Anniversary as Artistic Director.” Bold and triumphant, the piece serves as a wonderful celebration of the effort and dedication shown by Maestro LaGruth.

The Concert Suite from Dances with Wolves is compiled from the soundtrack written by Oscar winner John Barry for the 1990 movie starring Kevin Costner. Arranged by Steven Rosenhaus, the suite features several prominent and moving themes of the movie, including Two Socks at Play, the Love Theme and the John Dunbar Theme. The music is full of a rich elegance and rustic sound to match the setting of the plains.

Hexenritt, written by Engelbert Humperdinck, is a musical prelude to Act II of the opera Hansel and Gretel. Written in 1892, the opera tells a version of the fairy tale of Hansel and Gretel, who, after becoming lost in the forest, are caught by a witch in a gingerbread house who wishes to turn them into gingerbread and eat them. Yet, these clever children are able to turn the tables on the witch, turn the magic back onto her and escape, freeing other children in the process. The hexenritt, or Witch’s ride, comes after the audience learns of the witch’s existence in the story, and is meant to suggest the witch flying around the forest on her broomstick looking for children.

The Symphony Fantastique is the work most closely associated to Hector Berlioz. The work is comprised of five movements, each of which tells part of a coherent story. In the story, a young artist, Berlioz himself, poisons himself with opium in a fit of despair over a hopeless love and sinks ever deeper into hallucinations that include his murder of the girl and execution for the crime. The girl is an idée fixe, an obsession with him, and is represented in each movement by a musical theme that changes subtly based on the theme of the movement. Throughout the work, you can feel and hear the change in his perception through musical motifs, culminating in a whirlwind of a finale certain to electrify.