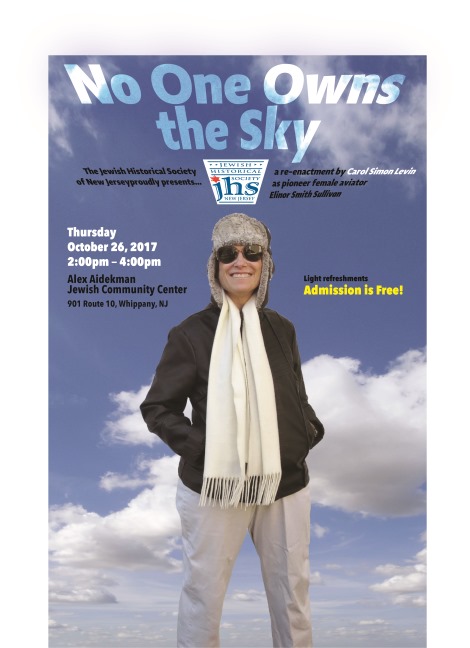 An exhibit to draw attention to New Jersey's Jews who "stepped up" during World War I was prepared by the Jewish Historical Society of New Jersey (JHS) to commemorate the 100th anniversary of America's entry into the war.

During the run of the exhibit—The Road to Victory: Greater MetroWest and World War I—there will be a public program featuring reenactor Carol Simon Levin who will speak about women serving during the war as pilots.

Most people when asked to name early female aviators can name only one name, Amelia Earhart.  But long before Amelia Earhart’s famous exploits, female flyers had already proved that aviatrices were every bit as brave and daring as their male counterparts. Flying in flimsy wood and canvas aeroplanes, Aida de Acosta, Raymonde de Laroche, Hélène Dutrieu , Marie Marvingt, Harriet Quimby, Katherine Stinson, Ruth Law, Bessie Coleman and Elinor Smith awed and thrilled people on the ground executing audacious acrobatic aerial maneuvers, soloing across the English channel, setting records, barnstorming and buzzing beneath New York’s bridges.  Undaunted by male skepticism, they were determined to show that anything that men could do, they could do too!

Light refreshments will be served.

The Road to Victory: MetroWest and WWI is an exhibit that focuses on the role of Jews from the Greater MetroWest NJ region both on the field and in the home front during WWI. Please come visit!

WHEN:  Through November 14th
WHERE: Alex Aidekman Jewish Community Center - 901 Route 10 - Whippany, NJ
ADMISSION: Free and open to the public during building hours