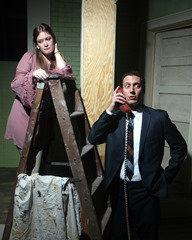 WHEN: October 6, 7, 13, 14, 21 and 22 at 8pm and October 15 at 3pm.
WHERE: Chatham Playhouse, 23 North Passaic Avenue, in Chatham
TICKETS: $25 for adults and $23 for youth/senior.
Tickets can be purchased at our Box Office or Online. To access the theater’s new online ticketing service, where you can now reserve your particular seat, simply go to ccp.booktix.com. The service is available 24 hours a day, and tickets can be purchased online up until three hours prior to curtain on the day of a performance. Chatham Playhouse’s box office will begin accepting phone reservations on September 26 at (973) 635-7363. For information regarding box office hours, please call the box office number listed above. Patrons with special needs requiring seating accommodations should contact the Playhouse at least 24 hours prior to the performance. Without prior notice, accommodations cannot be guaranteed

The Chatham Community Players open their 96th Season with Neil Simon’s Barefoot in the Park, a play that is at once a charming and magical romantic comedy, and a commentary on power as a corrupting force.

Paul and Corie Bratter are newlyweds in every sense of the word. He’s a straight-as-an-arrow lawyer and she’s a free spirit always looking for the latest kick. Their new apartment is her most recent find – too expensive with bad plumbing and in need of a paint job. After a six-day honeymoon, they get a surprise visit from Corie’s loopy mother and decide to play matchmaker during a dinner with their neighbor-in-the-attic, Velasco, where everything that can go wrong, does. Paul just doesn’t understand Corie, as she sees it. He’s too staid, too boring, and she just wants him to be a little more spontaneous. Running “barefoot in the park” would be a start. Producer,

Mara Lundstrom of Maplewood added, "This Neil Simon classic brings lightness and levity to the stage. CCP’s production captures the nuances in Simon’s marvelous writing about love, family, friends, and NYC. The set and scenic design have become an additional character in CCP’s production, adding a convincing look at life in NYC in the 1960’s. A funny, witty, and friendly comedy, Barefoot in the Park will tickle everyone’s fancy for a fun night of theater.”

The hilariously talented and diverse group of actors making up the cast are Crystal Ann Bennett from Rahway as Corie, Matthew Cronin from Chatham as Paul, Arnold Buchaine from Summit as Velasco, Joyce Slous from Montclair as Ethel Banks and Dominick DeNucci from Cedar Knolls as Telephone Repairman.

Director Hegarty explained that, “Barefoot in the Park has stood the test of time as one of Neil Simon's most enduring plays. Since its premiere on Broadway in 1963, followed four years later by a film adaptation (as well as a short-lived sitcom), it has remained a mainstay in professional and amateur theaters across the country. What make this play so universal are its themes of love and compatibility, as well as its focus on conventionality versus unconventionality. It truly is a classic.”

Barefoot in the Park is presented by special arrangement with Samuel French.

About the Chatham Playhouse
The Chatham Community Players has been entertaining residents of Morris County and the surrounding area since 1922. The organization’s mission is to produce high-quality theater for a diverse audience, while elevating its standard of excellence and providing a creative outlet with educational opportunities and outreach programs. For more information, including details of CCP’s 2017-2018 season, visit www.chathamplayers.org. Funding has been made possible in part by Morris Arts through the New Jersey State Council on the Arts/Department of State, a Partner Agency of the National Endowment for the Arts.