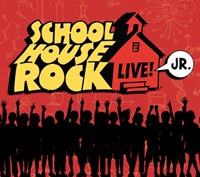 The Emmy Award – winning 1970s Saturday morning cartoon series that taught history, grammar, math, science, an politics through clever, tuneful songs is instructing a whole new generation to Unpack Your Adjectives and do The Circulations! Tom, a nerve-wracked school teacher nervous about his first day of teaching, tries to relax by watching TV when various characters representing facets of his personality emerge from the set and show him how to win his students over with imagination and music, through such beloved Schoolhouse Rock songs as Just a Bill, Lolly, Lolly, Lolly and Conjunction Junction.

Directed by Centenary University Assistant Professor of Theatre and Centenary Stage Company’s Young Audience Series director, Lea Antolini–Lid.  Antolini–Lid received her BMA in classical voice from the University of the Arts and her MFA in acting from Brandeis University where she also had the opportunity to teach movement for the actor under the tutelage of Susan Dibble.  She has performed professionally in NYC and in cities on the east coast.  Recent credits: Working, The Last Five Years, The Fantasticks! (Women’s Theater Company of NJ); The Learned Ladies, Mary Poppins, Peter Pan, The Wizard of Oz, Oliver!, A Christmas Carol and Christmas at Small’s Empire Music Hall (Centenary Stage Company); A Year with Frog and Toad, Mid – Summer Night’s Dream, Junie B. Jones and Suessical (The Growing Stage Theater Company); 400 Parts per Million, Lying (Blessed Unrest Theater Co. NYC).

The cast features Centenary University students in all roles from performing to technical and stage management.  NEXTstage Repertory is the all student production company highlighting the close collaboration between the Centenary University Theatre Department and the professionally producing Centenary Stage Company.