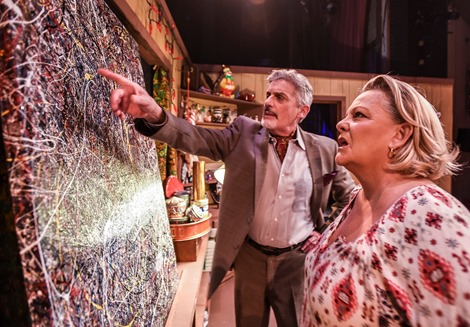 WHEN: October 26 to November 5; Thursday, November 2, 2:00 PM; Friday, October 27 (Opening Night) and November 3, 8:00 PM; Saturday, October 28, and November 4, 8:00 PM; Sunday, October 29, and November 5, 2:00 PM. There will be a conversation with the cast and creative team on Thursday, November 2, following the evening performance.
WHERE: Bickford Theatre, 6 Normandy Heights Rd., Morristown
TICKETS: $45 for the General Public; $40 for Seniors; $38 for Museum Members; and $20 for Students (18 & under or with valid college ID).
Group rates are available. There is a $3 service charge per ticket. The show contains Adult Language.
Tickets may be purchased online at morrismuseum.org, by phone at (973) 971-3706, or in person at the Bickford Theatre Box Office. The Morris Museum’s Bickford Theatre is located at 6 Normandy Heights Road in Morristown, NJ, and offers free parking and full accessibility. Box office hours for phone sales are Monday through Friday, 10:00 am to 5:00 pm. Walk-up hours are Tuesday through Friday, 11:00 am to 5:00 pm.

The play, which received the Elliott Norton Award for Best New Play in 2013, was a smash hit when it opened for a limited run on London’s West End. It contains Adult Language.

Leading the cast in the role of Maude Gutman is the very popular Kim Zimmer, a four-time Daytime Emmy Award Winner for Outstanding Lead Actress. Kim will share the stage with Carl Wallnau, the celebrated Artistic Director of the Centenary Stage Company. He will play Lionel Percy.

Inspired by true events, this hilarious and thought-provoking comedy/drama asks timeless questions about what makes art and people truly authentic. Maude Gutman, a 50-something unemployed bartender living in a trailer park, has bought a painting for a few dollars from a thrift store. At first she almost throws it away but instead convinces herself that it is a lost masterpiece by Jackson Pollack worth millions. So to evaluate the painting, world-class art expert Lionel Percy travels from New York to Maude’s home in Bakersfield to determine whether it is authentic or not. What ensues is a fiery, entertaining, and wonderfully funny debate over class, truth, and what we perceive as valuable.

It is a play loved by both audiences and critics. When it opened in London, The Telegraph called it “…one of the best plays on now in London.” And during the run in Los Angeles, the Los Angeles Times said it was “a perfect marriage of emotion and ideas!” Vanity Fair praised Bakersfield Mist, proclaiming that it was “not to be missed” and the Orlando Sentinel gushed that it was “cleverly funny….”

Producing Artistic Director Eric Hafen has more than 35 years of theater experience having acted in or directed productions throughout the Northeast, including shows off-Broadway and in New Jersey. When asked about Bakersfield Mist, he said, “When I read the play, I knew that it was perfect for the Bickford Theatre because of our affiliation with the Morris Museum. Stephen Sachs tackles the large questions on creativity and the value of art with wit and humor. And our audience will love it.”

Playwright Stephen Sachs is the author of eleven plays produced both here and abroad and has received many awards not only for his plays, but also for his work as an artistic director and theatre director. As the co-founder and co-artistic director of The Fountain Theatre in Los Angeles, he has won multiple awards including the prestigious Ovation award twice. And he has twice been a finalist for the PEN Literary Award for Drama.