5th GRADE NATURE ART ON VIEW IN PRINCETON THROUGH OCTOBER 18 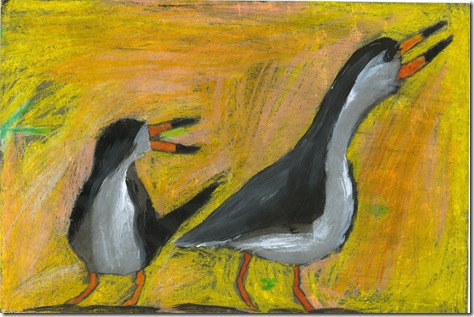 Winning art and essays from each county were judged by artists and scientists, respectively.  (Top: Black skimmer by Hunterdon County winner, Ulises Tovar) 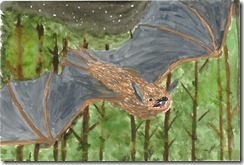 For this annual contest, students painted and wrote scientific essays on New Jersey’s more than 80 threatened and endangered species. For this 15th competition, art was chosen by artists; essays by scientists. The students’ texts reveal causes for the animals having become endangered, and methods of future protection. The young artists delve into local environmental issues. They effectively express concerns for the world around them, developing ways to improve ecological crises.  Throughout, the students experience ways in which their personal actions impact the natural world. This year’s competition drew more than 2,500 entries. Tens of thousands of New Jersey children, since 2003, have participated in the Species on the Edge Art & Essay Contest. (above, right, Bat in Flight, by Mercer County winner, Emma Phelan)

Throughout this process, New Jersey fifth-graders become virtual wildlife biologists. According to David Wheeler, Conserve Wildlife Foundation Executive Director, "These talented children poured their hearts into the Species on the Edge contest, creating vibrant artwork and passionate essays about these rare wildlife species. We are inspired to connect the next generation of New Jersey conservation leaders with their natural world. Their art and essays illustrate the wonders of nature, revealing challenges we must overcome to help vulnerable wildlife survive in our densely populated state."

This year’s young artists were honored at an awards ceremony at the New Jersey Education Association in Trenton. The contest was sponsored by PSEG, NJEA, GAF, Atlantic City Electric, Church & Dwight and ShopRite.