A fellow theatergoer described British playwright Joe Orton's What the Butler Saw as English farce plus the French Theatre of the Absurd raised to the 10th power. I couldn't agree more. Now onstage at the Shakespeare Theatre of New Jersey in Madison, this racy farce will have your head spinning with multiple costume changes, mistaken identities, slamming doors—even a near-naked man racing across the stage! 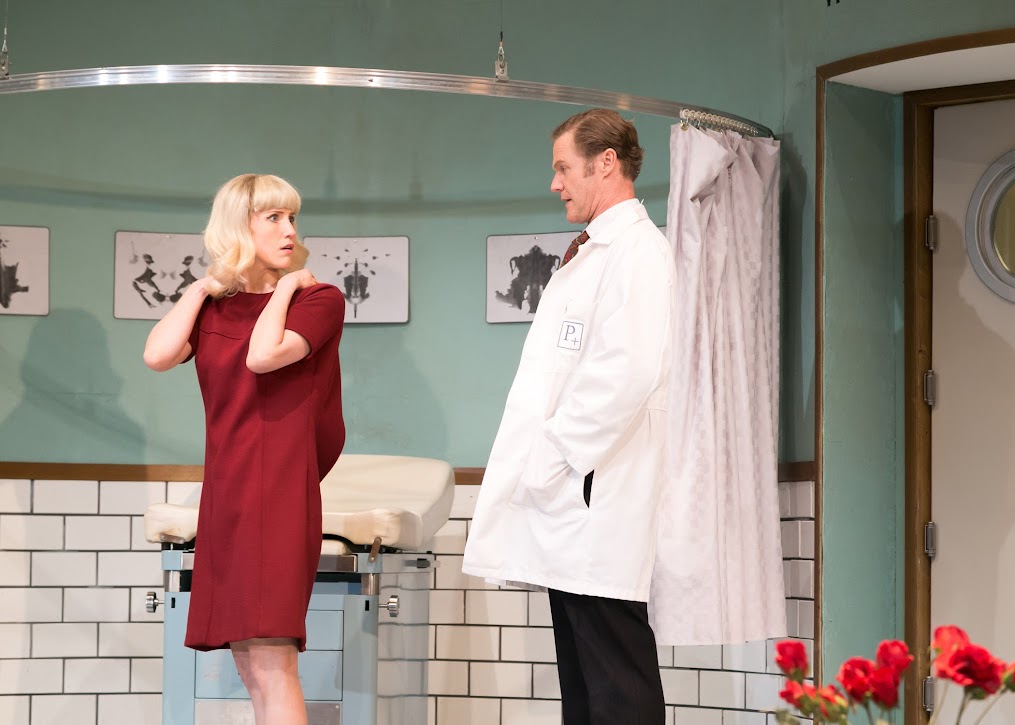 The plot is almost too complex to explain. Suffice it to say that it involves randy psychiatrist Dr. Prentice (Peter Simon Hilton, left), who attempts to seduce secretarial candidate Geraldine Barclay (Allison Laymon, left) during a job interview—an act derailed when his nymphomaniac wife bursts in with a wild tale of having been raped in a closet by one Nicholas Beckett, a hotel bellhop. Promised a job with her husband, he pursues her and sets off myriad complications that are resolved by

some startling revelations in the penultimate scene. Adding to the hilarity are the appearance of Dr. Rance, a government psychiatrist sent to inspect the madhouse Prentice directs, and a bumbling policeman, Sergeant Match, hot on the trail of a body part reputed to have been snatched from the corpse of Winston Churchill. That the mayhem occurs in an insane asylum—by people who are supposed to be sane but decidedly are not—only underscores the fragility of truth in the hands of the powerful and its ultimate power to be known, despite how easy it is to twist it.

Considered quite shocking when it was first produced in 1969, What the Butler Saw seems quite tame today. Despite its racy talk, adult subject matter and partial (and in one case almost complete) undress, it poses the question, Who is mad, and proves that “in a madhouse, unusual behavior is the order of the day.”

The combination of farce and Theatre of the Absurd requires a steady, albeit light, directorial touch, and Paul Mullins keeps the action barreling along and the insane ravings of the characters sounding almost natural. Nevertheless, the second act dragged a bit, and I found myself checking my watch from time to time. 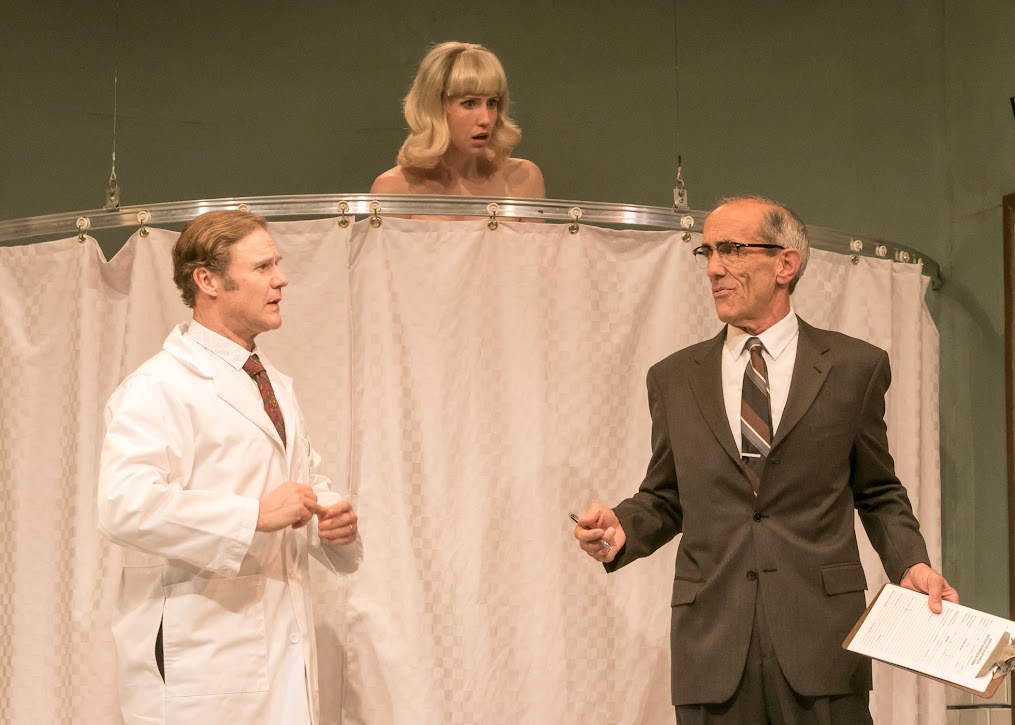 The six talented actors, several of them rather new to the company, carry off the insanity with aplomb and the physical comedy with great timing. Peter Simon Hilton is superb as Dr. Prentice; despite his character’s unsavory behavior, we almost feel sorry for his having to deal with his very brittle wife, played with verve by Vanessa Morosco (above, right). She tosses off snarky zingers with a rapidity that defies thought. John Hutton’s Dr. Rance (above, with Hilton and Layman) is more than a little mad; with his prurient interest in buggery and incest, he’s hardly up to the job of supervising Prentice. Clearly a misogynist, Rance jumps to conclusions about Miss Barclay’s mental health and summarily commits her to the asylum without an examination; his power permits him to behave so unprofessionally and get away with it. 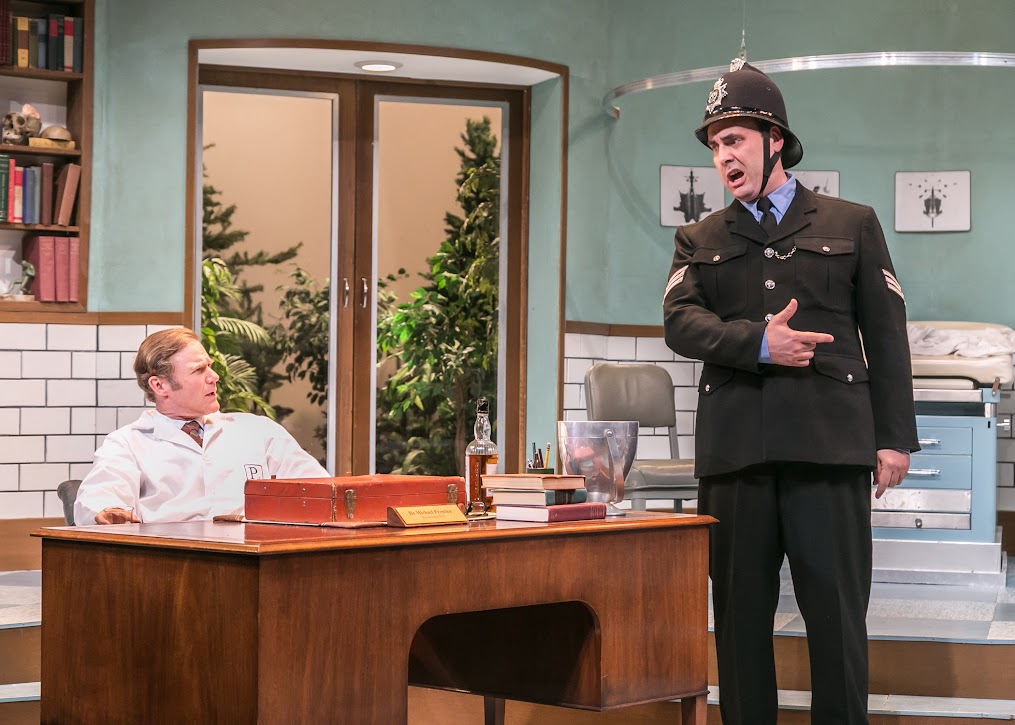 As Miss Barclay, a winning Allison Layman struggles mightily to assert her sanity, but it’s a losing battle. Her youthful counterpart, Nicholas Beckett, played by a wide-eyed Robbie Simon, gets to utter racy non sequiturs about rape without blinking an eye. And Jeffrey M. Bender (left) is appropriately dopey as Sergeant Match, confounded by the mad antics of the educated folks in charge of the asylum and intent on completing his investigation into Churchill’s missing organ.

Brittany Vasta has designed a set with the requisite doors perfect for slamming, and several characters, male and female, get to wear Kristin Isola’s costumes reminiscent of the 1960s. Rick Sordelet coordinates the action so the actors avoid collisions as they race around the set.

While incest, buggery, seduction, misogyny and rape can be offensive to modern audiences, Artistic Director Bonnie J. Monte noted that What the Butler Saw provides “the perfect comedic response to our current world, one in which we find ourselves questioning our sanity or that of others on a daily basis.” Joe Orton presciently depicted the mayhem that can result when those in power act in an insane manner and twist the truth to fit their own ends—a point not lost on us today.