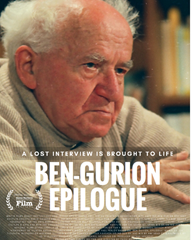 Six hours of interview footage with David Ben-Gurion, filmed in 1968 when he was 82, has recently been discovered and released. The setting is his secluded home in the desert, removed from all political discourse, providing him with a hindsight perspective on the Zionist enterprise.

Ben-Gurion’s introspective soul-searching is the focus of this film, and his clear voice expresses his deep understanding of the currents of history and a surprising vision for the future of Israel. His grandson, Alon Ben-Gurion will appear and speak at the screening.

IAC Cinematec was founded by Etti Inbal with the support of Aya Schechter and the team of IAC NJ, to introduce the US public to Israeli films, film makers, and daily life in Israel in an effort to create an Israeli-American community of film fans, who can share in the experience and enjoy dialogues about the films. Films are screened with English subtitles and attended by a guest director, actor, or a film professional, who will discuss issues related to the film in English.