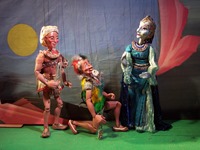 The Prince & The Magic Flute

WHEN: Sundays at 1:00 pm, beginning October 1st. The Prince & The Magic Flute by Puppetworks runs October 1 to December 10th. (Please note: there will be NO performances November 12, 19, 26).
WHERE: Merseles Studios, 339 Newark Avenue, Jersey City 07302
TICKETS: advance tickets/online sales: $9 for children; $10 for adults. At the door: $11 and $12; $9 each for groups of 20 or more
School discounts and private party bookings are also available. To purchase online tickets visit: www.jctcenter.org.

Since 2014, JCTCKIDS—the children’s division of Jersey City Theater Center (JCTC)—has brought children’s theater in the form of classic marionette puppetry to the puppet theater at Merseles Studios. While previous productions were based on fairy tales, folklore and classic children’s literature, The Prince & The Magic Flute is based on a beloved opera, adding another dimension to puppetry in Jersey City.

“Our version of The Prince and The Magic Flute is a musical, but all the songs the puppets sing and the instrumental music on the soundtrack are the original compositions by Mozart,” said Mike Leach, Executive Director of Puppetworks. “Puppetworks pride ourselves with keeping timeless, traditional stories alive. Our shows also serve as one of the first introductions to theater and literature that families can give their children. With The Prince & The Magic Flute, we also add operatic storytelling and Mozart to that introduction.”

The Prince and The Magic Flute was performed in 1791—just two months before the premature death of Wolfgang Amadeus Mozart. Mozart wrote this fairytale opera for the theatrical troupe at the Theater auf der Wieden, where Mozart frequently performed. The story—of a prince saving a damsel—was actually based on several sources, especially medieval romance literature. The story follows a brave prince and his funny, bird catcher sidekick—with the help of magic bells and a magic flute—on their quest to rescue a princess from the Palace of the Sun. Their story includes such highlights as a giant crocodile, eerie creatures of the night, tests of water, fire and silence, and a final confrontation with the evil Queen of the Night.

JCTC-KIDS presentation of The Prince & The Magic Flute follows on of the most successful Puppetworks runs in Jersey City. The winter/spring production of the Wizard of Oz at Merseles Studios saw sold-out performances as well as special bookings for schools and other groups.

“It is crucial for young audiences to have their first experience with theater to be positive and engaging, and through the artistry of the marionette, children learn about poetry, literature, classical music, and visual storytelling,” said Olga Levina, Artistic Director, JCTC. “We are very grateful for the support we’ve received from Jersey City families, and the responses have been overwhelmingly positive about our programming from people throughout New Jersey and beyond. JCTC is committed to keeping Puppetworks tickets affordable and working with school administrators, teachers, boards of education and other organizations so we can continue to grow JCTC-KIDS programming.”

Since 1980, Puppetworks has been committed to preserving the tradition of live-theater presentations through the art of Marionettes. Nicolas Coppola, founder and Artistic Director of Puppetworks, was honored by The Puppeteers of America with its 2011 President’s Award for “Outstanding Contributions to the Art of Puppetry.

Funding for JCTC-KIDS presentation of The Prince & The Magic Flute by Puppetworks was made possible through the generosity of Ben LoPiccolo Development Group, JCTC’s Board of Directors, private donors and local Jersey City businesses.