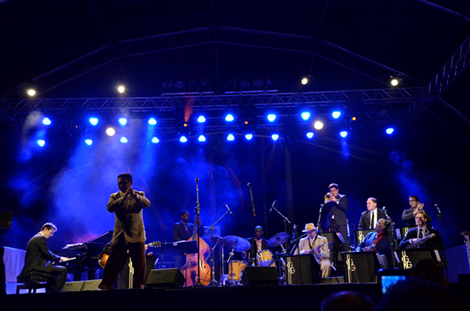 WHEN: September 2, 7:30 PM. The food truck picnic, which was extremely popular for Summer Jazzfest, will begin at 5:00 for those who want to enjoy some early fall tailgating.
WHERE: Bickford Theatre, 6 Normandy Hgts. Rd., Morristown
TICKETS: $25 in advance and may be purchased online, by phone at (973) 971-3706, or in person at the Bickford Theatre Box Office. All seats are reserved so order your tickets early.
www.morrismuseum.org

One of the world’s most popular big bands, the George Gee Swing Orchestra will appear for the first time at the intimate theatre.

About the band, Gee has said, “Our enthusiasm is obvious and infections. Swing music generally is upbeat and cheerful … It was created during a challenging era expressly to uplift audiences. And it continues to uplift us today.”

The George Gee Swing Orchestra was the first big band to play on MTV and has been spotlighted on many television shows from “Entertainment Tonight” to “Live at Lincoln Center.” The band has provided specially scored music and made an “animated” guest appearance in a Fantastic Four cartoon. Not only have they toured across the entire country from Boston to Beverley Hills, they have appeared all over the world in places as diverse as Europe, Asia, and South America. A mainstay at New York City’s famed Rainbow Room, the band is now a regular headliner at Swing46 Jazz and Supper Club in midtown Manhattan.