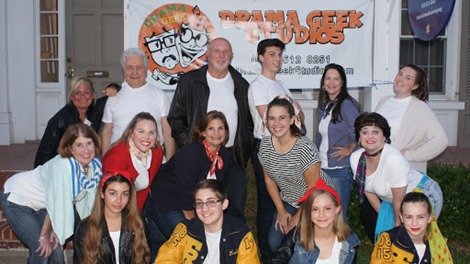 Those Were The Days Doo-Wop

WHEN: Friday, September 29, at 8 pm, Saturday, September 30, at 8 pm and Sunday, October 1, at 2 pm
WHERE: Sussex County Community College Performing Arts Center, 1 College Hill Dr., Newton
TICKETS: $25 at the door. $15 for students and seniors and $20 for adults if you reserve or purchase prior to show.
To reserve or purchase tickets contact 973-512-8251 or visit dramageekstudios.com.

The show features upbeat songs that get your fingers snapping and feet tapping, to those classic ballads that made 1950s teenagers swoon.

Audiences will reminisce from the doo-wop days with songs such as Will You Still Love Me Tomorrow, In The Still of the Night, Blue Moon, Going to the Chapel, Come See About Me, among many other fun-filled, hit-topping songs. Produced by Josh Reed of Sparta, Those Were the Days Doo-Wop is directed by Dan Reed of North Haledon, NJ. The adult performers include John Prall of Hamburg, Dominick Bartolomeo and Allison Ognibene of Sparta, DJohn Klumpp and Donna King of Byram, Jodi Hryhor of Newton, NJ, Veronica Pollock of Hopatcong, Meg Callan of Saddlebrook, Laura Bolt of Morristown, and Nanci Kline of Stroudsburg, PA. Seven high school and middle school students from the Sussex County area will also be performing.

Drama Geek Studios, the official community theater at Sussex County Community College Performing Arts Center, is a non-profit community theater located in Newton, NJ. A fun, interactive learning environment centered around the performing arts, Drama Geek Studios firmly believes that by developing creativity, fostering individuality, and allowing inspiration to be pursued, we become more productive people. The studio offers an opportunity for people young and old to come to the studio, take a class or two, have some fun and get geeky! Drama Geek Studios also has a community theater where anybody with an interest in live theater can audition and participate without a participation fee. Drama Geek Studios holds theater classes located at 13 Washington Street, Newton, NJ. For more information about classes and upcoming performances and auditions, visit dramageekstudios.com or call 973-512-8251