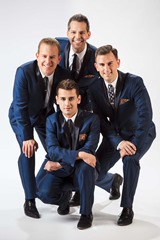 These entertainers shared the Broadway stage for over a thousand performances in the mega-hit Jersey Boys. Now, as The Midtown Men, they have thrilled crowds on concert stages and symphony halls across the continent, while also performing on Good Morning America, Access Hollywood, Katie and The Chew. Additionally, the Men collaborated with icon Stevie Van Zandt on their first radio single, “All Alone On Christmas,” featuring Van Zandt and members of Bruce Springsteen’s E Street Band.