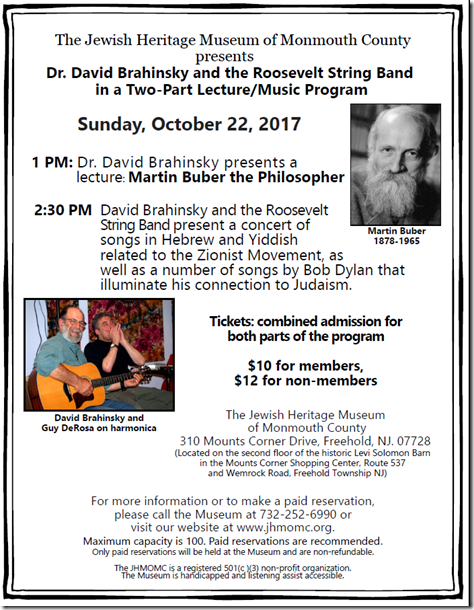 The Jewish Heritage Museum of Monmouth County is presenting a two-part program with Dr. David Brahinsky (and the Roosevelt String Band), about Martin Buber.

At 1:00 p.m., Dr. Brahinsky will present a lecture, Martin Buber and the Zionist Movement, about the philosophy of Martin Buber. Buber was one of the most important Jewish philosophers of the 20th century, deeply involved in the Zionist movement.  His focus was on "cultural Zionism," a focus he shared in the early decades of the movement with many of the political founders such as Chaim Weitzman.  As time went on, however, Buber found himself at odds with many of these leaders. Dr. Brahinsky will discuss the evolution of Buber's thoughts on the subject, how it relates to his overall philosophy, his most famous book, I and Thou, and how it came to be in conflict with the majority, and the consequences of this conflict today.

After the lecture at 2:30 p.m., David Brahinsky and Friends (The Roosevelt String Band) will present a concert, Songs of Zion in Yiddish, Hebrew (and via Bob Dylan!), featuring David Brahinsky on guitar and vocals, Guy DeRosa on harmonicas, Noemi Bolton on banjo/guitar and vocals, and Phil MacCauliffe on bass. It will include Hebrew and Yiddish music/songs related to the Zionist enterprise, as well as selected songs by Bob Dylan that illuminate his tie to Judaism.

David Brahinsky is a professor of philosophy and comparative religion at Bucks County Community College and the founder of the Roosevelt String Band.  He has given concerts and lectures at The Jewish Heritage Museum in the past.  He lives in Princeton with his wife, Naomi.

For more information or to make a paid reservation (non-refundable), call the Museum at 732-252-6990, or visit www.jhmomc.org. The Jewish Heritage Museum is located in the Mounts Corner Shopping Center, at 310 Mounts Corner Drive Freehold, NJ, at the corner of Route 537 and Wemrock Road (between the CentraState Medical Center and Freehold Raceway Mall). It is on the second floor of the historic Levi Solomon Barn. The JHMOMC is a tax-exempt organization under Section 501 (c)(3) of the Internal Revenue Code. The Museum is handicapped and assisted-listening accessible.