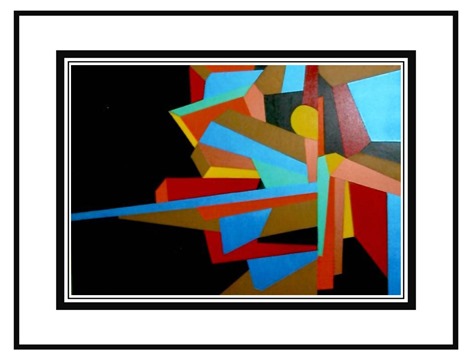 WHEN: during library hours from August 1 to August 29
WHERE: Montclair Public Library Gallery, 50 South Fullerton Avenue

Robert Ferguson grew up and attended school in New Jersey. After graduating from high school he worked for a while before serving a tour of duty as an Airborne Army Ranger in Vietnam. Upon returning home Ferguson decided to devote his life to creating things of beauty and embarked on a career in art. He pursued art studies at Du’Cret’s School of the Arts in North Plainfield, NJ. He went on to earn an Associate Degree in Fine arts at Essex County College and a Bachelor’s Degree in Fine Arts at Kean University.  During this time, Mr. and Mrs. Ferguson spent summers traveling to Europe, Brazil and the Caribbean, visiting many different kind of galleries. Ferguson was inspired by the variety of media and decided to use them in his dazzling creations.

Ferguson was a member of the Irvington Art Association and received many awards. He also exhibited in outdoor art shows in Atlantic City and New York City.

Robert Ferguson passed away in 2009, leaving a legacy of remarkable artwork for art lovers to enjoy and Mrs. Ferguson has graciously offered to share this work with us. So come to the Library enjoy this exhibit of mixed media cityscapes, geometric abstracts, landscapes and much, much more.

The Library welcomes inquiries from local artists and arts organizations regarding use of the exhibit space.  For further information, please contact the Montclair Public Library (973) 744-0500 ext. 2221.