FOLK MUSIC AWARD-WINNERS TO APPEAR IN MORRISTOWN THIS FRIDAY 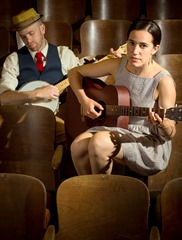 Robinson & Rohe, the duo of award-winning artists Liam Robinson and Jean Rohe, will perform at The Minstrel Acoustic Concert Series

Jean Rohe and Liam Robinson met a decade ago through their love of participatory music-making and American folk song. Their original repertoire is inspired by the traditions they hold dear and features carefully crafted lyrics, elegant vocal harmonies, and detailed arrangements for guitar, banjo, and accordion.

Acclaimed songwriters and performers in their own rights, they bring with them a wealth of creative experience. Liam was a cast member in the Tony Award-winning play “Warhorse” and recently music directed the hit Off-Broadway folk opera “Hadestown” by songwriter Anaïs Mitchell. He routinely tours and records with the Becca Stevens Band.

Jean has been associated with the Folk Project since joining as the eight-year-old prodigy star of her family band.  Jean’s songwriting has won accolades from the Independent Music Awards, ASCAP, and the Montreux Jazz Festival vocal contest. Her song “National Anthem: Arise! Arise!” has been performed and recorded by artists across the country and was published in the latest edition of the popular songbook Rise Up Singing. Jean was a Troubadour finalist at the 2016 Telluride Bluegrass Festival.

Openers Gerry Hazel and Olga Alvarez are an acoustic duo and active members of the Folk Project.  Their shared belief in the power of music as a force for good in the world motivates them to expand their horizons and see where this musical road takes them.  They sing both originals and covers in English and Spanish with beautifully blending voices and a welcoming stage presence.