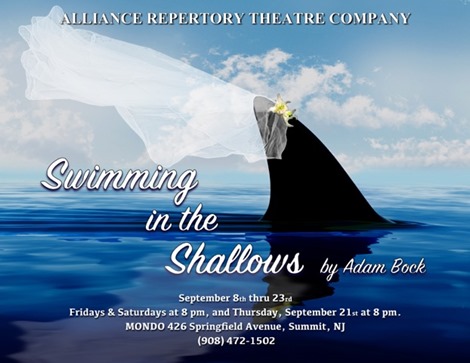 The Alliance Repertory Theatre Company is proud to present the off-beat comedy Swimming in the Shallows, a quirky comedy is about a group of friends’ exploration into everyday problems, anxieties and modern relationships, be they man-woman, woman-woman or man-shark.

This fairy-tale like story is eccentric and funny, yet also very moving as it explores gay weddings, heterosexual marriages, American Capitalism and the consequences of a love affair with a shark. It is an award-winning play described as "A screwy little jewel of a play", by the New York Times.

The cast includes Gus Ibranyi as Nick, Debbie Bernstein as Barbara, Elissa Strell as Donna, Gordon Wiener as Bob, Sarah Kuhns as Carla Carla, and Sean Morgan as the Shark.

The award-winning company, Alliance Repertory Theatre, is under the Artistic Direction of Michael Driscoll and was founded in 1999 by Jerry Marino and Jeff Streger. They are a non-profit 501c3company dedicated to producing distinctive, challenging and thought-provoking theater, and to providing local actors, directors and writers the opportunity to display and expand their talents.

“In the 10+ years I have been reviewing them, I have come to believe that Alliance Repertory Theatre is the Best Little Theater Company you've never heard of. Not only does Artistic Director Michael Driscoll have a knack for selecting little-known plays but, despite changing locations several times in the past few years and minus fancy sets, their productions are polished, professional and provocative—all at once.” —Ruth Ross, NJ Arts Maven