Since the economy tanked in 2008, necessitating financial bailouts of banks and the automobile industry, jobs has been the watchword of the day. Through three general election cycles, the promise to “bring more jobs back to America” and “retain the jobs already here” was made ad nauseam. Each month, we eagerly anticipate the number of jobs added to the economy since the last report, as though our very lives depend on a healthy index. Well, for a trio of metal stamping workers facing the closing of the last exporting automobile plant in Detroit, their lives—one about to be born, one anticipating owning his own business and one a year short of retirement—do. 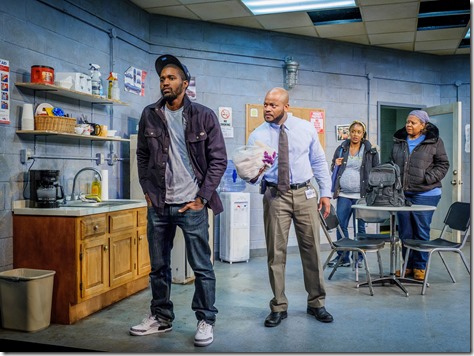 In its New Jersey premiere at the appropriately named Premiere Stages at Kean University, Dominique Morisseau’s taut Skeleton Crew presents a compelling, intimate, poignant portrait of American assembly-line workers facing the closing of a place they regard as a sanctuary in a rough city. As rumors swirl, two characters contend with competing loyalties and secrets that conflict with their own self-preservation. Union representative Faye and assembly line foreman Reggie have a complicated history; she has known him since he was a child visiting her home with his mother, who was the love of her life; he just purchased a house, has a family to support and obviously feels loyalty and love for Faye. When Reggie tells her about the plant’s close by the year’s end and swears her to secrecy, the conflicted Fay struggles mightily to keep her team employed and her integrity intact. (Above, L-R: Daniel Boisrond, Shane Taylor, Kirsten Adele, Patricia R. Floyd)

What happens on the stage of the Zella Fry Theatre is nothing short of a master class in acting, taught by four talented actors and helmed by the firm and experienced directorial hand of Premiere Stages’ artistic director John J. Wooten. To his credit, Wooten keeps the pace slow but the tension high. In my 22 years of reviewing theater, this is one of a handful of times I can say that the actors epitomize what it means to work ensemble. Convincing and natural, they fully inhabit the skin of their characters, to the point where I never doubted each was exactly who he or she pretended to be. 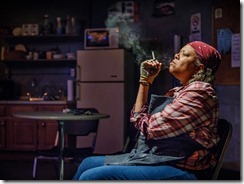 As Faye, Patricia R. Floyd (right)  is dignified, level-headed and seemingly in control, as befits the “matriarch” of a small family of workers. She freely doles out advice, sometimes drolly, sometimes sarcastically, but always with affection. In defiance of company rules, she sneaks a smoke whenever possible, much to our delight. And she stands up for a worker who has been insubordinate because she cares about him and knows how much the job means to him. But Floyd avoids portraying Faye as a goody-goody; her admission of Faye’s difficulties, hinted at early on but not revealed until near the end, is sad without being maudlin. The woman takes responsibility for her actions, and her final act of heroism is admirable.

Shane Taylor’s Reggie (left, with Floyd) is equally as riveting. The affection between him and Faye is palpable; they often hug, and display respect for each other. Taylor communicates Reggie’s conflict so well that we don’t feel antipathy toward him as part of factory management as much as we worry about his own uncertain future if the plant closes. When he finally takes Faye’s advice and fights for the workers, only to jeopardize his own position, Taylor’s meltdown is a wonder to behold. Shaking, stumbling, ranting, raving, he is the embodiment of anger and fear.

As the two younger workers, Daniel Boisrond (Dez) and Kirsten Adele (Shanita; both right with Floyd) are splendid. Boisrond’s Dez talks as fast as he dreams of a future owning his own garage; at first, it was difficult to understand his dialect and slang, but as I became more familiar with his cadence, it got easier. (I might suggest that he slow it down a tad from the start for those audience members who might have trouble; what he says is too important to miss.) With a dazzling smile, he dishes out compliments to Shanita, accepting her putdowns with good grace. His lanky frame is wired tight, and at times he appears to be looking for a fight, but we quickly accept his edginess as natural to a young black man who needs a job to fulfill his dreams. Adele’s very pregnant Shanita is attractively sassy without being mean to Dez. Her rant about traffic en route to work is hilarious; her speech about her pride in her work awe-inspiring. She’s a stellar employee, one any employer would prize; that she could her job for no fault of her own brings home to us the true tragedy of plant closings.

The third play in Dominique Morisseau’s Detroit Project: A 3-Play Cycle, Skeleton Crew enjoyed critically acclaimed Off-Broadway success in 2016, so it’s a pleasure for local audiences to be treated to a polished, professional production in nearby New Jersey. Morriseau is no stranger to Premiere Stages; her play about the civil rights movement, Follow Me to Nellie’s, was the theater’s play festival winner in 2011. Once again her rendition of vernacular dialogue borders on the poetic, and her characters pulse with the blood of real people.

If you missed Lynn Nottage’s Pulitzer Prize-winning drama about precariously employed steelworkers in Reading, Pennsylvania, when it ran on Broadway this past spring (or even if you did see it), you’ll want to get on over to Kean University where Dominique Morisseau tackles a similar subject with intelligence and wit that you’ll talk about over coffee after leaving the theater.

Skeleton Crew will be performed at the Zella Fry Theatre, 1000 Morris Ave., Union, through July 30. Performances are Thursdays, Fridays and Saturdays at 8 PM, and Saturdays and Sundays at 3 PM. For information and tickets, call the box office at 908-737-7460, visit www.premierestagesatkean.com online or email ticket@kean.edu.