NJ PREMIERE TO OPEN IN SUMMIT THIS WEEKEND 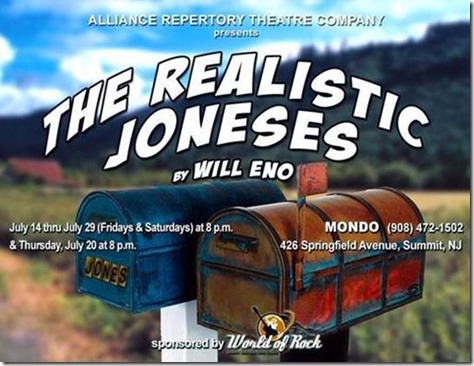 This production will be a New Jersey Premiere!

Nominated for both the Outer Critics Circle Award and Drama League Award in 2014!

"Mr. Eno's voice may be the most singular of his generation, but its humane, literate and slyly hilarious" - NY Times

"Eno's dialogue is a marvel of compression and trivial chitchat flipping into cosmic profundity with striking ease. Life in Eno-land isn't what you'd call realistic –It's more real than that" - Time Out New York

" Will Eno has written a play of such extraordinary wit and insight, so carefully constructed, it resonates for days. Lines of dialogue peal through your thoughts like distant bells" – Edge Media

For information and  tickets go to https://www.alliancerep.org/current-production or call 908-472-1502