HISPANIC THEATRE FESTIVAL TO BE HELD IN CRANFORD 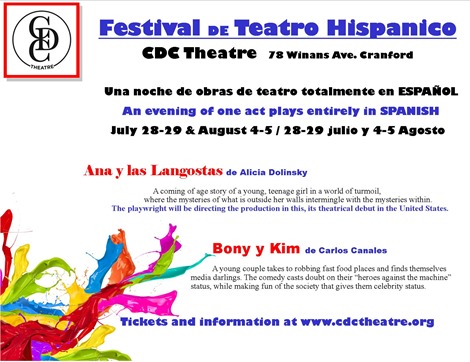 www.cdctheatre.org for tickets and information

Even though there is a large and vibrant Hispanic population in New Jersey, there are no Spanish-language plays being performed in central New Jersey. The CDC Theatre plans to bridge that gap by mounting the Hispanic Theatre Festival, featuring one-act plays that will showcase exciting and intriguing playwrights in Spanish for the Spanish-speaking population of the state.

Long-time CDC Theatre member Joel Redmount, who serves as both producer and a director for the Festival, outlined the genesis of the project. “Thousands of people grow up and raise families here in suburban New Jersey, often speaking Spanish at home, but they never even imagined the experience of hearing the beauty of the Spanish language brought to life on the stage I brought the germ of the idea to the governing board of the CDC Theatre earlier this year.  There is a lot of great community theatre being done in New Jersey—but this was an opportunity to tap into an underserved audience, to bring people to the Theatre who perhaps had never experienced it before.  That is a very compelling notion to any good Theatre.  Doing something new, something inventive, finding new audiences to fill seats.  The CDC Theatre board was highly encouraging.  They jumped at the chance and carved out time from the CDC Theatre summer schedule.”

The Hispanic Theatre Festival will span two weekends—July 28/29 and Aug 4/5—with four (4) evening performances starting at 8pm. Each evening performance will consist of two (2) one-act plays. Additional information about the Festival and how to order tickets can be found by visiting the theatre’s website at www.cdctheatre.org. Funding has been made possible in part by the NJ State Council on the Arts, Dept. of State, a Partner Agency of the National Endowment for the Arts, through a grant administered by the Union County Office of Cultural & Heritage Affairs.