CONCENTRIC CIRCLES OF INFLUENCE: AN EVENING OF FILM, ART AND MUSIC IN PRINCETON JUNCTION THIS SATURDAY NIGHT 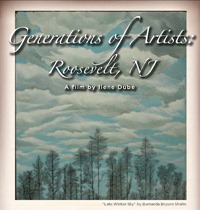 Generations of Artists: Roosevelt, NJ, a short documentary about a central New Jersey arts community that has continued through three generations, will be screened at the West Windsor Arts Center, 952 Alexander Road, Princeton Junction. Special guest appearances by filmmaker Ilene Dube, and artists Mel Leipzig and Jonathan Shahn, who will share a conversation about their artistic relationship, as well as musical performances by the Woe Nellies and The Big Rascals will round out the evening along with an ice cream social.  (Above: Film poster image featuring "Late Winter Sky" by Bernanda Bryson Shahn. Courtesy of Ilene Dube.)

Ever since artist Ben Shahn, who worked with Diego Rivera on the Rockefeller Center mural and was one of the most popular artists of the 1930s, was invited by the Works Progress Administration to create a mural in what was then called Jersey Homesteads, this rural village has become a haven for potters, painters, musicians and writers. Generations of Artists is a visit with the artists who continue to make Roosevelt their home nearly a century after the town’s founding.

Roosevelt, NJ, was founded to be a model—some even considered it a utopian—community. Nestled in fields and woods and surrounded by a greenbelt including the Assunpink Wildlife Refuge and preserved farmland and open space, the borough of Roosevelt—smaller than two square miles—includes a Borough Hall, a Post Office, a deli, a public school and a Ben Shahn mural. Today residents enjoy a rural lifestyle with easy access to New York, Philadelphia and Princeton.

There are painters, sculptors, photographers, writers, poets, potters, musicians and those who love to sing along. Throughout the year, the Roosevelt Arts Project produces performances at Borough Hall, everything from ukulele concerts and poetry readings to a Latin festival or an evening of NextGen electronic music.

The roots of the arts in Roosevelt go back to the mid 20th century. Originally named Jersey Homesteads, Roosevelt was established by the New Deal Resettlement Administration in 1937 as a place where Jewish garment workers could escape city tenements to breathe fresh air, farm cooperatively, operate a cooperatively-owned garment factory and shop in a cooperative store. 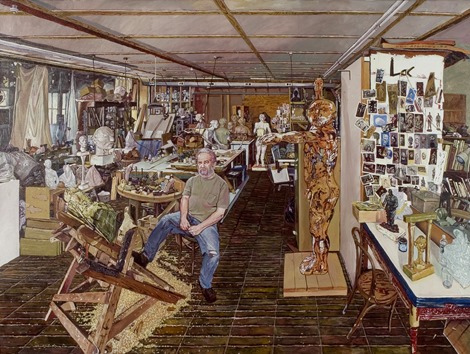 Today, Jonathan Shahn (ABOVE, in his studio), son of Ben and Bernarda and an important contemporary sculptor and recent recipient of the Academy of Arts and Letter’s Purchase Award, works in a studio in one corner of the former manufacturing site. In the town’s center is a large bronze head Shahn made of FDR, for whom the town was named, facing a park and amphitheater. (Image: Painting of Jonathan Shahn by Mel Leipzig. Courtesy of the Artist.)

The village has been placed on the National Register of Historic Places for its underlying vision, its cluster plan and for the Bauhaus-influenced houses. With 900 residents, including many artists of note, Roosevelt still has its share of farms, including a CSA (community supported agriculture) farm, a contemporary version of cooperative farming.

The event on July 15th at the West Windsor Arts Center will provide an opportunity to meet the filmmaker as well as artists Jonathan Shahn and Mel Leipzig who is somewhat of a Roosevelt history buff having painted many of its residents and having a long-time interest in the town’s roots.

Ilene Dube covers the arts of central New Jersey. Generations of Artists is part of a series of films she is producing on artist communities in the greater Princeton area. According to Dube, “This film evolved out of a 2013-2014 project co-produced with curators Judy Brodsky and Kate Somers, ‘Concentric Circles of Influence,’ a series of art exhibits about the influence of central New Jersey art communities on each other. A film was produced in conjunction, Queenston Press: Birth of an Art Community, about a women’s printmaking collective in Princeton beginning in the 1960s and ’70s, founded by Brodsky, and screened during exhibitions at the Historical Society of Princeton and Arts Council of Princeton. We look forward to welcoming the West Windsor Arts Council into the Concentric Circles of Influence.”

About the West Windsor Arts Council: