Women characters disguising themselves as men is an old literary device. In Shakespeare’s Twelfth Night, Viola passes herself off as the youth Cesario after being shipwrecked and separated from her twin brother. In the Japanese legend, Mulan dons male garb to go to war, and Isaac Bashevis Singer created Yentl, the Jewish girl who, in defiance of tradition, cuts her hair and disguises herself as a boy to enter religious training at a yeshiva.

In real life, authors Charlotte Bronte and Mary Ann Evans assumed male pseudonyms (Currer Bell and George Elliot, respectively) to get their work published, several women dressed as men to fight in the Civil War and Joan of Arc, the “Maid of Orleans” disguised herself and led the French to victory over the English in the Hundred Years War. 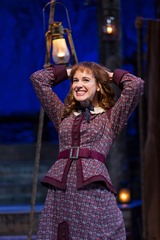 Add to this illustrious list Josephine Monaghan (Teal Wicks, right), a 19th-century Boston debutante who set out for the West after bearing a child out of wedlock and lived as a man in an Idaho mining town for 18 years—only to have her true gender discovered upon her death. While this true story inspired a 1993 film, it took a collaboration of composer Mike Reid, lyricist Sarah Schlesinger and John Dias to craft the script for a musical now onstage at Two River Theater in Red Bank. There, despite its rousing music and energetic choreography, a handsome, multi-talented cast of 12 examines the deeper question of the true cost of denying one’s true self and feelings—what is gained and, ultimately, what is lost. In the case of Josephine Monaghan, the answer is a great deal.

The plot of the musical mostly follows that of the movie, but the live production makes it more intimate and, in many cases, more immediate. The Two River version has simplified the story and made Little Jo an active, respected member of the mining community, thus adding to the poignancy of her situation. Add to that a romantic triangle, and the story becomes richer and more layered. 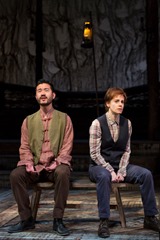 As Jo, Teal Wicks (left, with Daniel K. Issac)exhibits spunk, courage and single-mindedness Jo would need to maintain her assumed gender. She watches the men walk, move, talk, wipe their brows and engage in the back-breaking method of striking rock to expose the veins of silver. Although her Jo may fool the townsfolk, to the audience Wicks projects the loneliness her character experiences living with several secrets, unable to confide in a single person without blowing her cover. Wicks sings very well (especially in her final solo, “Unbuttoning the Buttons”) and joins the ensemble dances with a vivacity especially evident in the number called “Hi-Lo-Hi” in which the miners convey the difficulty of extracting silver from rock. And Wicks movingly expresses Jo’s unrequited love for Jordan without drifting into the maudlin. 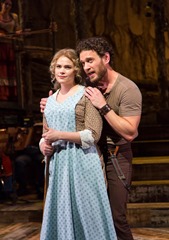 The handsome miner Jordan Ellis is beautifully portrayed by Eric William Morris. Playfully, he woos the barmaid Sara (right) and convincingly conveys and acceptance of this odd stranger with a slender build and beardless face. As the miners face losing their jobs because of the mine’s being shut down by its corporate owners, he communicates a quiet resistance to slipping into anger directed at the Chinese supposedly being hired in their place. He is truly an upstanding citizen of Silver City. He’s well matched by Jane Bruce as a feisty Sara, not sure if marriage (to Jordan) is right for her and enamored by Jo’s wise, understanding behavior. He dilemma is especially evident in “There Is This Man,” a duet she sings with Jo, and “Troubled Heart.” The third member of the ensemble to play one role, Daniel K. Isaac as Tin Man Wong maintains his dignity despite the disparagement of the townsfolk for his outsider status. His relationship with Jo reveals him to be a tender, accepting friend. And finally, As saloonkeeper Caroline, Leenya Rideout (below, far right) leads the ensemble, playing a banjo and violin in various musical numbers. 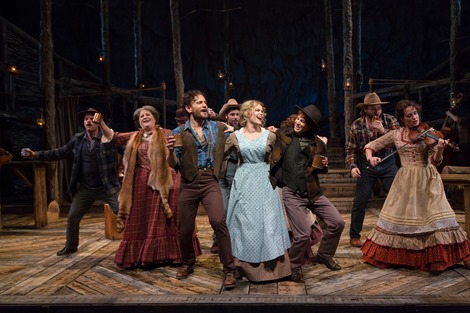 The other seven ensemble members assume a variety of roles, from villains to heroes, all with aplomb, moving effortlessly from one role to another with the addition of a hat, shawl, apron or vest. They agilely execute Marc Kimelman’s complex choreography, whether it be at a Boston train station, a 4th of July celebration or a celebration of winter. As in many modern musicals, the six-piece orchestra sits on each side of the stage; John O’Neill’s lively musical direction doesn’t drown out the singers. Their delivery of Schlesinger’s lyrics is clear at all times.

While this stirring tale, directed by Two River Artistic Director John Dias, unfolds and moves along steadily, the first act felt a bit long. Jo receives letters from Boston several times and even leaves Silver City to go to Chicago; so much moving about dragged somewhat. The second act, however, marches inexorably to its sad denouement. Michael Carnahan’s set is appropriately rustic, with rough wood floors and a curtain of burlap. Jess Goldstein’s costumes are appropriate to the time period and to the characters’ social stations; Jennifer Tipton’s lighting design and Drew Levy’s sound design are atmospheric and seamless.

Critic Roger Ebert described the film as depicting a culture in which "men of poor breeding lived and worked together in desperate poverty of mind and body, and were so enclosed inside their roles that they hardly knew each other at all,” and that is certainly true of Two River Theater’s musical production, The Ballad of Little Jo. Woven into this Western legend are problems that continue to confront us today: distrust of the outsider, animosity toward the “other,” the power of a mob that acts out of feelings of betrayal and, ultimately, the loneliness felt by those who have to hide something basic to their nature. I guess humanity still has some work to do.

The Ballad of Little Jo will be performed at the Joan and Robert Rechnitz Theater of the Two River Theater Company, 21 Bridge Avenue, Red Bank, through Sunday, June 23. For information and tickets, call the box office at 732.345.1400 or visit www.tworivertheater.org online. To learn more about Little Jo, plan to arrive in the theater lobby 45 minutes prior to curtain. There will be discussions with cast members and a member of the theater’s artistic staff following the performances on June 14 at 7 PM, June 18 at 3 PM and June 21 at 1PM.