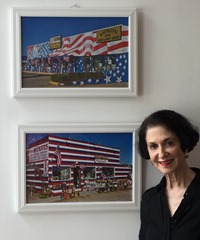 WHEN: June 21 until September 11. Hours are Wednesday through Saturday from Noon to 5PM.  Other times by appointment. The public is cordially invited to our Opening Reception on Sunday, June 25, from 4 to 6 pm. Refreshments will be served.
WHERE: ACL Gallery’s new facility at 2310 Carillon Way, Town Center.

In keeping with the theme “My America”  artists will be displaying works depicting what America means to them whether it be by color, red, white and blue, a special location in America, Americana art, or a symbol or historic theme. The artwork includes paintings, wearable art, accessories, jewelry, pottery, quilts, sculptures and photographs.

Shown in the photo is Sheila Bernard of Verona, NJ, along with two of her photographs of "Shop America" buildings taken in New Mexico and Utah.  Sheila began photographing Patriotic Americana buildings when she saw one all decked out in red, white and blue in Philadelphia and the Star Spangled Banner twirled in her head.  It happened another time in New York five years later.  Inspired to capture these red, white and blue buildings in all fifty states, “2 down and 48 to go,” she told herself.  And off she went, researching buildings around the country along with their stories and capturing photos of them and publishing in local newspapers.  Each one has its own story which Sheila is pleased to share with anyone who will listen.  One ice cream stand has ice cream cones for stars painted all over the building.  And one is a garage that was fully operating  repairing cars and farm equipment until a change came to the commerce in the community and his parking lot was empty at the photo shoot.  When word got out in the local paper along with the photo, people flocked to his garage and he was back in business.  Sheila's work is having a positive impact on many communities throughout the USA.

The ACL Art Gallery is a cooperative venue and a completely volunteer-staffed gallery.  For further information or to make an appointment, call Vivian Olshen at 973-650-6374.