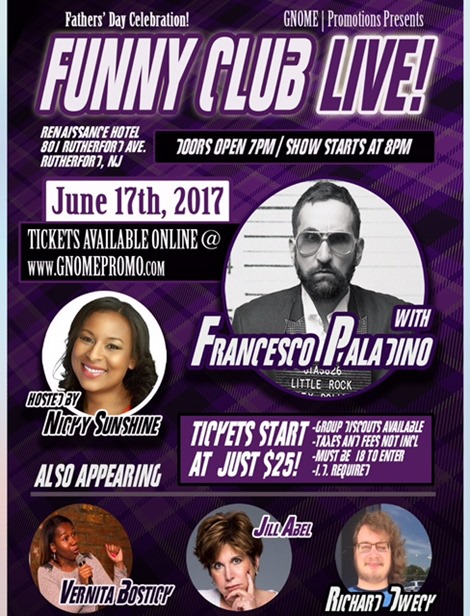 GNOME Promotions presents FUNNY CLUB! A LIVE 2-hour Comedy show featuring some of New Jersey's hardest working and talented comics. Join us for a night of libations and laughs at the Renaissance Hotel right off of Route 3 East in Rutherford, New Jersey.

Bar service available as part of hotel accommodations. Must be 18 years of age or older to enter show. ID required. There are NO REFUNDS for this event.

Francesco Paladino has been performing nationally and internationally as a comedian and actor for over a decade, appearing at iconic comedy clubs such as Gotham, Carolines, Dangerfield’s, New York Comedy Club, Comic Strip Live and many others. Francesco is also a card carrying SAG actor who has appeared on the hit Netflix drama “Orange is the New Black” and on “The Wendy Williams Show” as a recurring “On the Street” comic.

Vernita Bostick is an up and coming comedian from New Jersey and has performed at several clubs in the tri state area. She recently performed in the 2014 Women in Comedy Festival in Boston and was a semi-finalist in The Ladies of Laughter Competition in Manhattan. Influenced by comedians such as Joan Rivers and Chris Rock, she describes her comedy much like she describes her personality; witty, sassy, honest, and uncensored. She loves being a female comedian and feels empowered by giving women all over the world a voice to say what we often think but often don’t have the balls to say out loud. She will drop your jaw, provoke stares of disbelief, and force you to laugh whether you want to or not.