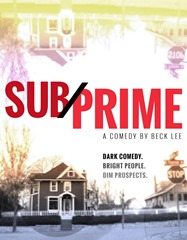 Subprime—a dark comedy about the personal consequences of the financial crisis—has its world premiere in Jersey City.

Subprime is set in the summer of 2008 when hints of an impending financial meltdown were being felt but studiously ignored. Subprime introduces us to the Crocker-Kellys and the Swensons, two couples from the well-to-do Linden Hills neighborhood in Minneapolis. On a NYC vacation they cannot afford, during the course of an evening of relaxation in their hotel, the scope of their denial about the state of their finances, their marriages and even their identities comes into sharp focus.

During the play’s development process, which included a handful of high-profile staged readings, Subprime was called the next God of Carnage by the theatre blog, On Stage: “If you think you might at all be interested in watching the next ‘God of Carnage’ … then you owe it to yourself to give ‘Subprime’ a look ... It’s a show that’s going to get talked about, so I’m going to start talking now.”

JCTC presents thematic series of theatre, performances, readings and visual arts on a topic global in scope yet relevant to the community. Subprime brings a comedic and human dimension to one of the most severe economic disruptions in recent history, the financial crisis that closed out the first decade of the new century and was followed by what is now known as the Great Recession.

“Subprime is hilarious,” said Olga Levina, Artistic Director, JCTC. “It’s also honest and thought provoking. Sometimes it seems we’ve forgotten what led to the financial crash and often ignore how it changed our lives. There’s no better time than now to remind people of both the financial collapse and how decisions made by politicians, financial institutions and corporations can impact society.”

Because Jersey City is just across the river from New York City, Lee calls the World Premiere of Subprime at Merseles Studios one of the most convenient first runs a new play can hope for. “This is an Out-Of-Town tryout that couldn’t be closer to home, only a PATH train away,” said Lee. “I’m excited this project is being launched at JCTC, a growing performing arts center, which includes White Eagle Hall and the intimate black box theater at Merseles Studios, in a very charming, old part of Jersey City.”

"I am thrilled Lee's wickedly funny play will be presented by JCTC as part of the Disruption series,” said Jacobs. “Working with the team at JCTC is a great opportunity for us to explore this new work on its feet, in an artistically supportive environment. As a New York based director, I look forward to sharing this play with the Jersey City audience and seeing how they receive this new work."