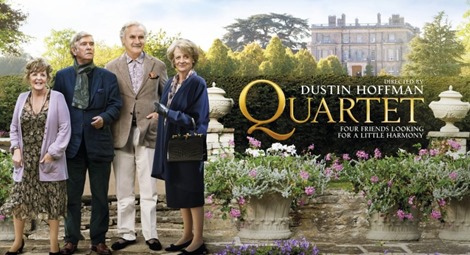 WHEN: June 4 at 3pm  - 6 pm
WHERE: Princeton’s Garden Theatre, 160 Nassau Street, Princeton
TICKETS: $15
TICKETS AVAILABLE EXCLUSIVELY THROUGH MCCARTER THEATRE CENTER
GENERAL ADMISSION SEATING
Information and general admission tickets for the June 4 event are available by calling (609) 258-2787 or visiting the McCarter Theatre Ticket Office.
A link to online ticket sales can be found at www.princetonfestival.org.
The Princeton Festival’s 13th season of performances across the genres of opera, Broadway musicals, jazz, dance, choral music, film and more runs from June 3 to June 25.

Fans of the 2012 Dustin Hoffman film Quartet, starring Maggie Smith and Tom Courtenay among other well-known actors, can join lovers of great singing at Princeton Festival program  that will expand their enjoyment of both art forms.

The program will open at 3pm with a discussion of the film and the place of music in its story by a three-member expert panel. The movie will be screened at 4pm, followed by a live performance by Festival artists of operatic vocal works, including the quartet from Verdi’s Rigoletto referred to in the film’s title.

“You sometimes see programs that combine a movie with discussion, but I don’t know of any others that add a live performance to the package,” said Richard Tang Yuk, General and Artistic Director of the Festival. “We wanted to do something unusual and enjoyable for our audience, and Quartet gives us the opportunity to involve the wonderful singers from our production of Beethoven’s opera Fidelio.”

Quartet is a bittersweet story of four retired opera singers whose difficulties in reconciling their past professional and personal differences get in the way of their promised performance of opera favorites for their retirement community’s crucial annual fundraiser. Art and death are at the core of this film, with the central theme revolving around the need to have a creative outlet. Living without a creative outlet is tantamount to dying, both literally and metaphorically.

Can the main characters resolve their disagreements in time to sing the Rigoletto quartet? We hear the piece on the soundtrack, but never actually see them performing it. “Quartet2” attendees, however, will see—and hear—a rendition by Festival vocalists after the movie, plus other arias.

The panel discussion on “Opera and the Movies” that introduces the afternoon’s program will be moderated by Andrew Lovett (L), composer and Professional Specialist at Princeton University. Michael Wood (R), critic and Professor of English at the University, and Sara McDermott (center), filmmaker, screenwriter, and founder of the Princeton Independent Film Festival, will join Lovett to delve into the topic.