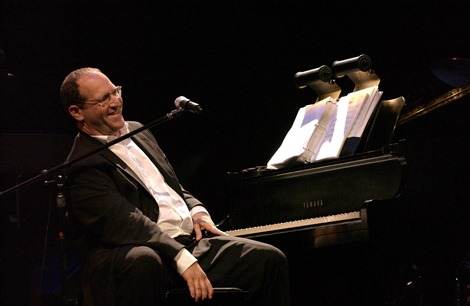 WHEN: Friday, May 19, at 8:00 p.m.
WHERE: Bickford Theatre, 6 Normandy Hgts. Rd., Morristown
TICKETS: $35 for the General Public; $33 for Seniors; $30 for Museum Members; and $20 for Students (18 & under or with valid college ID). Group rates are available.
Tickets may be purchased online at www.morrismuseum.org, by phone at (973) 971-3706, or in person at the Bickford Theatre Box Office. The Morris Museum’s Bickford Theatre is located at 6 Normandy Heights Road in Morristown, NJ, and offers free parking and full accessibility. Box office hours for phone sales are Monday through Friday, 10:00 am to 5:00 pm. Walk-up hours are Tuesday through Friday, 11:00 am to 5:00 pm.

Neil Berg’s The Pianomen pays tribute to the songs of two of iconic artists of the 20th Century, Billy Joel and Elton John. The award-winning composer, lyricist, and producer Neil Berg will be joined by vocalists Danny Zolli and Michael Lanning in an intimate performance of the classic hits beloved by the whole world on stage at the Bickford Theatre.

Neil Berg is best known for his hit Off-Broadway musical The Prince and the Pauper which received rave reviews and enjoyed a successful two-year run at the Lambs Theater. His credits also include a musical version of Grumpy Old Men, based on the Jack Lemmon and Walter Matthau classic, the Broadway holiday musical Tim and Scrooge, and his current hit rock musical The 12. He also created and co-produced the number one Broadway touring concert in the United States today, Neil Berg’s 100 Years of Broadway. His other credits range from plays and musicals to concerts and films which have garnered critical and audience acclaim. Dedicated to community service, Berg has been awarded the Ellis Island Medal of Honor, a Distinguished Citizen’s Award from the Rockland Family Shelter, American Red Cross Man of the Year, and many others.

Singer Danny Zolli brings an enormous vocal range to the show as well as his more than 20 years of experience on Broadway, Off-Broadway, and on-tour in concert. He is best known for his work in more than 25 different productions of Jesus Christ Superstar. He also starred in the 20th Anniversary Concert, the 25th Anniversary Concert, and the 30th Anniversary Concert of the legendary show. A much in-demand singer, he has shared the concert stage with some of the world’s most renowned performers including Jose Carreras, The Gypsy Kings, Peter Frampton, Phoebe Snow, and Felix Cavaliere.

Joining Neil Berg and Danny Zolli for this non-stop showcase of timeless hits is singer/songwriter Michael Lanning. Possessing a powerful voice, Michael has recorded or toured with many musical greats including Donovan, Fleetwood Mac, Larry Gatlin, and George Harrison. He starred in the Tony Award-nominated Broadway production of The Civil War and has been the featured vocalist for the Trans-Siberian Orchestra.