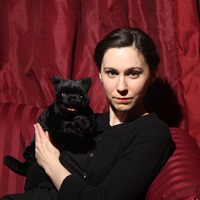 John Van Druten’s romantic comedy, Bell, Book and Candle, opened on Broadway in 1950, starring Rex Harrison and Lily Palmer, and in 1958 was made into a film starring Kim Novak and Jimmy Stewart. Given their selection of sometimes edgy, modern works, it seemed to be an interesting, albeit unusual, choice by the Chatham Community Players to end their 95th season.

Well, Bell, Book and Candle turns out to be the perfect antidote to a tumultuous week wrangling over health care bills and tax reform—not to mention some hellacious weather. With the plot turning on whether a beautiful witch can fall in love with a mortal and live happily ever after, the troupe’s charming production of Van Druten’s bit of fluff is just what the doctor ordered.

Sexy, and with full confidence in her seductive powers, witchy Gillian Holroyd unexpectedly falls for her handsome upstairs neighbor, publisher Shep Henderson—unexpectedly, because witches are supposedly unable to fall in love lest they lose their powers! Upon learning that Shep is engaged to a woman she knew and despised in college, she uses her powers to derail the relationship and claim Shep for herself. On hand to complicate matters are Gillian’s eccentric Aunt Queenie (who lives above Shep) and her rather ghoulish-looking warlock brother Nicky (think Barnabas Collins from television’s Gothic soap opera, Dark Shadows). To further cement their relationship, Gillian introduces Shep to Sidney Redlitch, an author who has written a ridiculous book about magic and is looking for a new publisher.

It would be easy to dismiss Bell, Book and Candle as a musty period piece, but Director Elizabeth Rogers’ evident affection for the material gives it a Sinatra-smooth vibe; even the 1950s references to events and figures are more bittersweet than jarring (especially to theatre-goers of a certain age). The elegant New York apartment designed by Bob Lukasik and lit atmospherically and playfully by Nicholas Marmo provide the perfect canvas for the eerie high jinks occurring there. Original music composed and performed by Joe DeVico enhances the milieu, as do the period costumes by Fran Harrison and props and set decoration by Kate Pierce and Tish Lum.

But it is the ensemble of actors who weave the real magic in this production. Christine Talarico’s Gillian (left, seated) is physically attractive and very seductive. Just watching her witchy defenses crumble when she’s in Shep’s arms is a treat, and when she weeps over losing him, we know she can never go back. On opening night, she was a bit stiff at first, but as the three acts proceeded, Talarico appeared to relax and warm to her character’s mood changes. Pierce V. Lo (far left) is smashing as Shepherd Henderson, transitioning from stodgy to passionate as he falls under Gillian’s spell. As Aunt Queenie, Lisa Barnett (right) is eccentricity personified; she reminded me of Noel Coward’s Madame Arcati, the eccentric medium and clairvoyant in Blithe Spirit). Her attire, a mishmash of hippie-ish pieces, suited to her odd personality. Anthony Bentrovato (standing, right)  as Nicky seemed to slink and slither rather than walk; his expressive eyebrows added to his chilling demeanor. Finally, as Sidney Redlitch, John A. C. Kennedy turns in a raffish performance as an author smitten by fame and sure of his craft. He’s hilarious when his confidence turns to jelly when he fears Gillian’s retribution for taking Shep to another witch to exorcise the original spell. The only other “character” who bears mentioning is Gillian’s familiar, the cat Pywackett, whom she uses to cast her spells. Obviously, the prop is a puppet, but the way Talarico holds (top) and caresses it makes it look all too real.

America in the 1950s wasn’t always as idyllic as we’d like to remember, but Bell, Book and Candle offers a nice diversion from today’s problems. You’ll be charmed by the casual household witching— the bored snap with which Gillian unleashes a thunderstorm—and her competitive spell-casting with her man-on-the-make brother. So come on down to the Chatham Playhouse for a bit of time travel—and a respite from the woes of the world.

Bell, Book and Candle will be performed through May 20 at the Chatham Playhouse, 23 N. Passaic Ave., Chatham. For information and tickets, call the box office at 973.635.7363 or visit www.chathamplayers.org  online.