THE HIT MEN TAKE US BACK IN MUSICAL TIME @ bergenPAC 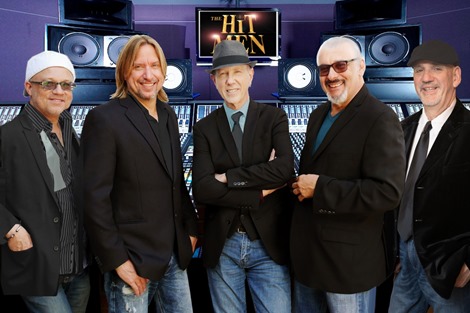 Legendary Performers with Frankie Valli, Carole King, Cat Stevens and more! The Hit Men—a super group consisting of Lee Shapiro, Jimmy Ryan, Russ Velazquez, Steve Murphy and Jeff Ganz—either played, sang or did both on some of the most memorable hits of the era, including “Who Loves You,” “Oh What a Night,” “The Loco-motion,” “Peace Train,” “Mony Mony,” “Joy to the World” and other songs in which they used their talents to spin wax into gold and platinum.

The Hit Men connect with audiences on a level rarely seen by today’s music acts. From the classic songs we all know and love (such as “Oh What a Night” and “You’re So Vain”) to the backstage stories never told until today, a Hit Men show is like no other as they combine the music and the memories alongside exciting multimedia footage & visuals, evoking an unforgettable and nostalgic experience. “We can do whatever we want with complete legitimacy,” Shapiro said. “We have an emotional connection with the audience that tribute bands and sound-alike bands can’t have. When we share our experiences and tell stories we aren’t reciting a script. We were there. When we tell you how ‘My Eyes Adored You’ was originally called ‘Sweet Eyes of Georgia,’' we know because we were there.” Reliving the magic they created on stages around the world and in recording studios with some of our most cherished musical artists, when The Hit Men take the stage today, it’s easy to see why their music has transcended generations.

About bergenPAC
Founded in 2003, the 1,367-seat Bergen Performing Arts Center, or bergenPAC, is the area’s cultural mecca. Housed in a historic Art Deco-style theater boasting one of the finest acoustic halls in the United States, bergenPAC attracts a stellar roster of world-class entertainment. The jewel in our crown is The Performing Arts School at bergenPAC – the innovative, educational performing arts initiative that, through programs, classes, outreach, school shows, and main theater presented shows, reach more than 30,000 students and community youth annually. The Performing Arts School provides community youth, age 2 months to 21 years, with unique, “hands-on” training in music, dance and theater by industry professionals. It is through the ongoing generosity of sponsors, donors, members, and patrons that the not-for-profit 501 (c)(3) corporation bergenPAC and The Performing Arts School are able to thrive and enrich our community.