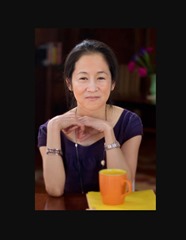 ONE BOOK PROJECT: WHEN THE EMPEROR WAS DIVINE
by Julie Otsuka

Raritan Valley Community College in Branchburg will present several events this spring, including an author lecture and theatrical performance, focusing on the theme of Japanese internment in the United States during World War II. The programs are all part of the College’s “One Book” project, featuring Julie Otsuka’s novel, When the Emperor Was Divine (Knopf, 2002)

WHEN: Wednesday, April 19, at 6:30 p.m.
WHERE: RVCC’s Nash Theatre, 118 Lamington Rd. Branchburg
The event, which will include a question-and-answer-session and book-signing, is being made possible in part by funding from TD Bank. There is no admission charge.

When the Emperor Was Divine is loosely based on Otsuka’s family history. The day after Pearl Harbor was bombed, Otsuka’s grandfather was arrested by the FBI as a suspected spy for Japan. Her mother, grandmother and uncle spent three years in an internment camp in Topaz, Utah.

The novel begins on sunny day in 1942 in Berkeley, California, when a woman sees a sign in a post office window. She returns to her house and matter-of-factly begins to pack her family’s possessions. Like thousands of other Japanese Americans, she and her family have been reclassified, virtually overnight, as enemy aliens and they are about to be uprooted from their homes and sent to a dusty internment camp in the Utah desert.

Otsuka tells the story of one Japanese American family from five different points of view: the mother receiving the order to evacuate; the daughter on the long train ride to the camp; the son in the desert encampment; the family’s return home; and the bitter release of the father after almost four years in captivity.

Otsuka’s first novel, When the Emperor Was Divine has been translated into 11 languages and has received numerous awards and accolades. The novel has been assigned to incoming first-year students at more than 45 colleges and universities and is a regular “Community Reads” selection for libraries, schools and organizations. Otsuka, a graduate of Yale University and Columbia University, travels around the country to speak about her novel and the history of the Japanese-American internment.

Continuing on the theme of Japanese internment, The Theatre at RVCC will present a production of 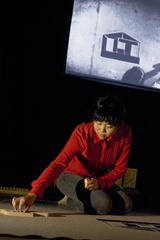 Bend
WHEN: Saturday, May 6, at 7 p.m., and Sunday, May 7, at 3 p.m.
WHERE: RVCC’s Nash Theatre, 118 Lamington Rd. Branchburg
TICKETS: $20 each for the May 6 performance and $15 for the May 7 matinee.
For tickets and information about the performance of Bend, visit www.rvccarts.org. For additional information about any of the programs, contact Cindy Alexander at 908-231-8801 or cindy@rvccarts.org.

Bend tells the true story of two men interned in a Japanese American internment camp during World War II: Kimi Maeda’s father, an Asian art historian who suffered from dementia at the end of his life, and the subject of his research, the renowned artist Isamu Noguchi. Using shadow and projection, theatre artist Kimi Maeda retells the story of her father and Noguchi, both of whom were incarcerated in a camp in Poston, Arizona. Referencing the landscape of the camp’s desert, she uses sand to create live highly detailed drawings inspired by these images. Both compelling and moving, this intimate visual performance examines the effects of losing one’s home, one’s cultural identity and one’s memory, and poses important questions about how the Japanese American internment camps will be remembered.

RVCC’s One Book program is a community-wide initiative that presents a book worthy of close reading and engages RVCC students, faculty and staff, as well as members of the larger community, in a wide range of discussions, workshops and performances. For a complete list of One Book programs, including group book discussion, lectures and a presentation by a sand artist, visit http://rvccarts.org/OneBook.html.

Raritan Valley Community College’s main campus is located at 118 Lamington Road in Branchburg, NJ. Serving Somerset and Hunterdon County residents for close to 50 years, RVCC is an educational and cultural center that is nationally recognized for its innovative programming, service to the community and environmental leadership. The College offers more than 90 associate degrees and certificates, as well as career training, professional development, and adult and youth personal enrichment courses. The College also has a performing arts center and planetarium.

RVCC is committed to offering a quality and affordable education through effective teaching, liaisons with the community’s businesses, and state-of-the-art technology. For further information, visit www.raritanval.edu.