PUSHCART PLAYERS TO PRESENT “PETER & THE WOLF” IN RAHWAY 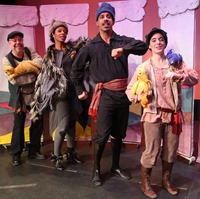 PETER AND THE WOLF

WHEN: Saturday, April 8, at 11:00 AM
WHERE: Union County Performing Arts Center,1601 Irving Street | Rahway,
TICKETS: $15, with discounts for groups of ten or more.
For single tickets, visit the UCPAC website or call the box office at 732-499-8226.
For group sales, contact Pushcart Players at 973-857-1115.
For further information on this or any Pushcart Players program, visit the website www.pushcartplayers.org or email information@pushcartplayers.org.

Pushcart Players, New Jersey’s renowned touring theatre for young audiences will perform their beloved musical production, “Peter and the Wolf” in Rahway, NJ.  In their 43rd Season of touring theater for young audiences—bringing performances to schools, theaters, production venues, and community centers throughout the United States—Pushcart continues their residency in the beautifully appointed historic theater in Rahway.

Peter and the Wolf is an enchanting production of a classic tale, set to the resplendent music by composer Sergei Prokofiev. Each character is represented by a different musical motif in this story of a spirited young boy who confronts the dangers of the forest with courage, creativity, and leadership. With a professional cast (Actors’ Equity Association) who employs various forms of puppetry, singing, and choreography, “Peter and the Wolf” is a universal theatrical celebration that has toured nationally and abroad.

“Pushcart puts its’ trademark spin on Peter and the Wolf,” said Ruth Fost, playwright and lyricist. “The themes of this Eastern European folk tale are what make it a timeless classic. Friendship and caring. Arrogance and prejudice. Youth and maturity. Conflict resolution and beauty in the natural order of life. All worthy of celebration!”

Phebe Taylor was recently seen flying around as Peter in “Peter Pan” at Beef and Boards Dinner Theatre. She is a company member of the Heartland Actors’ Repertory Theatre in Indianapolis, where she appears in summer Shakespeare productions. Phebe is also a frequent performer at Indianapolis' Phoenix Theatre, in such shows as “Urinetown,” “Bloody Bloody Andrew Jackson,” “The Zippers of Zoomerville,” “Boston Marriage,” “Peter and the Starcatcher,” and the National New Play Network's "Rolling World Premiere" of “End Days”.

Oscar Castillo has been a member of Pushcart Players for twelve years. A graduate of Kean University with a BFA in theatre, he co-founded The Theatre Project and performs frequently throughout New York City with Peculiar Works Productions.

Christina Gordon holds an M.F.A. in Acting from Rutgers University/ Mason Gross School of the Arts and has performed regionally at The Public Theatre & Shadowland Theatre. Television credits include: HAPPYish, Person of Interest and “Guiding Light. Film credits include: I Hate Being Black and Damsel. Christina co-wrote and produced the award wining short-film, I Hate Being Black.

Larry Hochman is the Tony and Drama Desk award-winner for best orchestrations for “The Book of Mormon.” He received Tony nominations for “She Loves Me” (2016 revival, for which he won the Drama Desk Award), “The Scottsboro Boys,” ”Monty Python's Spamalot,” (Hochman also received Drama Desk nominations for both), “Fiddler on the Roof” (2004 revival), “A Class Act” and a Tony nomination the Drama Desk Award for 2016’s “She Loves Me.”  Larry composed additional music for Disney’s “Little Mermaid,” for Stephen Spielberg’s “Amazing Stories” and for numerous celebrity concerts.  Other awards include the ASCAP Award for Musical Theater (“One Man Band”), 4 Emmy Awards for “The Wonder Pets” television series, and a Bistro Award for composing “One Man Band.”  He has orchestrated and/or written the scores for the majority of Pushcart’s productions.

Pushcart Players is the award-winning professional touring theater company specializing in arts education for children. Twice nominated for an Emmy©, Pushcart is the recipient of numerous state and private awards for excellence and innovation. A social-profit organization founded in 1974, Pushcart brings substantive musical theater, workshops, and residencies to young people and their families in schools and theaters nationwide. The company has traveled more than 2 million miles nationally and abroad, from the nation’s White House to the rural red schoolhouse.  All performances come with innovative scenery, complete lighting, and state of the art sound systems, making them adaptable to any location.