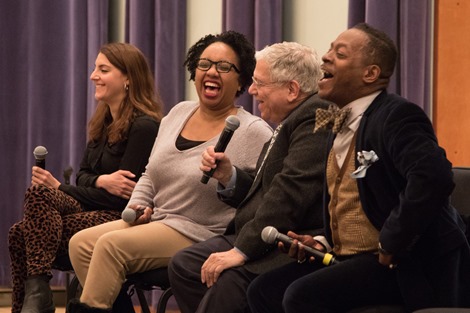 Community plays a big part in this program, with the topics of the plays and the public outreach both geared towards special interest groups or geographical locales. Joel Stone’s play, The Calling, will appeal to nurses, caregivers, and families of terminally ill patients. Nicole Pandolfo’s Brick City will appeal to Newark residents and people with disabilities. Pia Wilson’s Return to Real will appeal to people with an interest in identity and racial justice.

“We are delighted to continue our partnership with NJPAC on Stage Exchange,” said John McEwen, Executive Director, New Jersey Theatre Alliance. “This program helps us promote our member theaters, support the voices of established and emerging playwrights, and contribute to the American theater repertoire. Crossroads Theatre Company, New Jersey Repertory Company and Premiere Stages at Kean University have each established themselves as leaders in the development of new theater work. We look forward to the staged readings of the new works developed by these theaters and their full productions next season.”

“The success of NJPAC Stage Exchange lies in the unique collaboration among a performing arts center, a theater service organization and producing theaters,” said Julia Kraus, NJPAC’s Producer, Artistic Development. “We hope this innovative model serves to inspire other arts organizations across the country.”

In 2014, NJPAC began StageX, which featured staged readings of plays-in-progress by notable New Jersey playwrights. In 2015, an educational component was integrated into the program as a way to deepen the impact of the new plays and support the producing theaters. In response to the resounding successes of last season, the artist-in-residence model continues this season. This year's commissioned artists will conduct residencies at high schools in Newark, East Brunswick, and Long Branch. Plays from the 2016 Commissions include Indian Head (Nikkole Salter), which received a full production at Luna Stage in West Orange; Fixed (David Lee White), which will be produced by Passage Theatre Company in Trenton in May; and Surely Goodness and Mercy (Chisa Hutchinson), which will be produced by Writers Theatre in Madison.

NJPAC Stage Exchange is presented in partnership with New Jersey Theatre Alliance, with support from the Geraldine R. Dodge Foundation.

In The Calling, Carl, a mysterious stranger, attends funeral services at a Somerset, NJ church presided over by the venerable Father Dan. He learns that Carl is a nurse and the deceased was his patient. But Father Dan gradually discovers that Carl is a troubled soul and that his “caregiving” went much too far.

Joel Stone was formerly the artistic director of Off-Off Broadway’s The Theatre Asylum. In 1998, his play Horrors of Doctor Moreau (published by Samuel French, Inc.) became the first script-in-hand reading to debut at New Jersey Repertory Company. The following year, his short play The Age of Miracles premiered at NJ Rep and went on to be a finalist at the Samuel French Short Play Festival. Also in 1999, NJ Rep presented Written in Stone, an evening of Stone’s short plays, including The Speck of Dust in Bugsy’s Eye (featuring the late Kim Hunter). Recently, Stone directed the mainstage production of Gino DiIorio’s Release Point and was the director/mentor of the award-winning NJ Rep Young Playwrights Project, Shelter From The Storm, in which local high-school students wrote short plays about Hurricane Sandy. Currently, he is the literary manager for NJ Rep.

The New Jersey Repertory Company was founded in 1997 by SuzAnne and Gabor Barabas. Its mission is to develop and produce new plays and to make a lasting contribution to the American stage. Over twenty years NJ Rep has produced 115 plays of which over 90 have been world premieres. The theatre has the additional distinction of having had many of its plays produced by other professional theaters around the country totaling 80 subsequent productions in the U.S. and overseas. In 2012 it was the recipient of a National Theater Company Award from the American Theater Wing. New Jersey Rep adheres to no specific style or philosophy and seeks only to champion that which engages and challenges an audience with compelling themes and stories, and strives to extend the language and scope of theatre as an art form. In May 2016, the theatre acquired a new property and is in the process of launching a capital campaign to build two additional theatres, residences for out-of-town actors and playwrights, an art cinema, and an art museum located two blocks from the Jersey Shore.

In this topical and compelling new play, worlds collide inside a failing Newark public school. Jessie, a combative high school senior with a disability, and Darnell, the star player of his high-school basketball team, find themselves together in extended study hall during the most important marking period of their lives. As Darnell inches dangerously close to throwing away a lucrative college scholarship and Jessie a potential career as an artist, both discover that things aren’t always as simple as they may seem.

Nicole Pandolfo is currently a 2016-17 Dramatist Guild Fellow and was recently selected as a finalist for the Stanley Drama Award. Her work has been developed through the Jerome Foundation, The Actors Studio, the Lark, and NJ Rep among others, and she was a finalist for the Edward Albee Foundation Fellowship and the Leah Ryan Fund for Emerging Women Writers. She is a member of The Actors Studio in the Playwright/Director Unit directed by Lyle Kessler and received her MFA at Hunter College. For more information, visit nicolepandolfo.com.

Premiere Stages at Kean University is committed to serving the cultural needs of northern and central New Jersey through the development and production of high-quality Equity theatre premieres, professional development and educational initiatives for the local and campus communities, and the support and cultivation of emerging playwrights and theatre artists. As a professional theatre company in residence at Kean University, Premiere Stages at Kean University actively engages and enhances the specialized training programs at Kean, while embracing and serving a culturally diverse audience, underserved local youth, and a broad pool of gifted regionally-based artists. Pia Wilson’s new work examines race, identity, and acceptance of others, seen through the eyes of a brother and sister who discover that one of their fiancées is a descendant of a Confederate soldier.

Pia Wilson is a 2017 NJPAC Stage Exchange commissioned playwright, 2015 Sundance fellow, and a recipient of the 2014 Sarah Verdone Writing Award. She is a 2012-2013 resident with the Lower Manhattan Cultural Council’s Workspace program, a member of the 2008 Emerging Writers Group at The Public Theater, and a 2009 playwriting fellow with the New Jersey State Council on the Arts. Her drama Turning the Glass Around was produced by Workspace Collective in October 2014, Generation T was produced at Adelphi University in March 2014, and The Flower Thief was an August 2012 co-production between Horse Trade Theater Group and The Fire This Time play festival. For more information, visit piawilson.com.

Founded in 1978 by Ricardo Khan and L. Kenneth Richardson, Crossroads Theatre Company embraces the vision that African-American theater is intended for a broad-based, diverse audience. As a major force in the development of new ideas and the introduction of formerly marginalized writers, Crossroads produces works that enrich and diversify the representation of African American culture on the American stage. Crossroads was the winner of the 1999 Tony Award for Outstanding Regional Theater in the United States.

About New Jersey Theatre Alliance
New Jersey Theatre Alliance unites, promotes, strengthens, and cultivates New Jersey’s professional theatres. It advances the theatre community by developing innovative, collaborative, and engaging programs and services for member theatres and their diverse audiences. They also produce public programs such as the annual Stages Festival, offering free and low-cost theatre events throughout March, and NJArtsTix, an online discount ticket service. Its member theatres are both large and small with a wide variety of repertoires, each a fully functioning business that pays its staff and artists (designers, technicians, directors, and actors). Through their programming, these theatres inspire, challenge, and entertain about one million theatre-goers annually, and enrich communities through outreach programs and arts education. For more information, visitnjtheatrealliance.org.

About NJPAC
New Jersey Performing Arts Center, located in downtown Newark, NJ, is among the largest performing arts centers in the United States and is the artistic, cultural, educational, and civic center of New Jersey—where great performances and events enhance and transform lives every day. NJPAC brings diverse communities together, providing access to all and showcasing the state’s and the world’s best artists while acting as a leading catalyst in the revitalization of its home city. Through its extensive Arts Education programs, NJPAC is shaping the next generation of artists and arts enthusiasts. NJPAC has attracted more than 10 million visitors (including over 1.5 million children) since opening its doors in 1997, and nurtures meaningful and lasting relationships with each of its constituents.