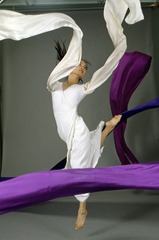 Hot off the trail of sold-out performances of their Year of the Rooster Celebration at the New Jersey Performing Arts Center and Brooklyn Center for the Performing Arts, the critically acclaimed Nai-Ni Chen Dance Company will take residence at Centenary Stage Company on the campus of  Centenary University in Hackettstown in April with public programs that celebrate the Company’s artistic vision and heritage.

On Sat. April 9, the Company will showcase its visionary new program, CrossCurrent, comprised of a series of works that highlight Ms. Chen’s unique cross-cultural contemporary dance style that brings together the freedom and American modern dance and the discipline of her Asian American heritage. The dances in Crosscurrent showcase different aspects of Nai-Ni Chen’s work as she encounters different elements of western culture as a woman from the east.

The Centenary Stage Company program will feature Nai-Ni Chen’s most recent work, Space Oddity with music by David Bowie, adapted to classical instruments for the Ahn Trio, as well as the Ahn’s Yu Rung by Pat Matheny. The evening will also include The Way of Five – Earth, which is part of the five element series from Ms. Chen where she studies the creative and destructive power of the elemental forces that govern our lives; and her most recent group work, Calligraffiti Variations with music by Huang Ruo for seven dancers, where she associates her experience with the street art form and the supreme art of Chinese calligraphy that has influenced her movement style since she started to dance.

ABOUT NAI-NI CHEN DANCE COMPANY
The dances of Nai-Ni Chen fuse the dynamic freedom of American modern dance with the grace and splendor of Asian art. The Company’s productions take the audience beyond cultural boundaries to where tradition meets innovation and freedom arises from discipline. The Nai-Ni Chen Dance Company is a vital resource of culture in the eastern United States. Each year, thousands of audiences are transported beyond cultural boundaries to the common ground between tradition and innovation, discipline and freedom, and form and spirit. According to The New York Times, they "...essentially recreated nature..."

Choreographer and dancer Nai-Ni Chen is an artist whose work defies categorization, as she is continually working on new ideas from influences around the world. Her mesmerizing and dramatic contemporary choreography has gained increasing recognition among domestic and international presenters and festivals. Recently, the Company was honored by a distinctive grant award from both the President’s Committee on Arts and Humanities and the Department of State to represent the United States in a seven-city tour arranged by the Tamaulipas International Arts Festival in Mexico.

The Nai-Ni Chen Dance Company also has the unique honor of having received more than fifteen awards from the National Endowment for the Arts and numerous Citations of Excellence and grants from the New Jersey State Council on the Arts. In the First China International Dance Festival in Kunming, Yunan, the China Dance Association presented to the Company its most prestigious honor for companies not based in China, the Golden Lotus Award.

The 2016- 17 season of performing art events at the Centenary Stage Company is made possible through the generous support of the Geraldine R. Dodge Foundation, the NJ Sate Council on the Arts, the Shubert Foundation, the Blanche and Irving Laurie Foundation, the Sandra Kupperman Foundation, and CSC corporate sponsors. These include Premier Season Sponsor Heath Village Retirement Community, Silver Sponsor Hackettstown Reginal Medical center, Home Instead Senior Care (Washington), The Holiday Inn in Budd Lake, Fulton Bank of New Jersey, as well as Centenary Stage Company members and supporters.