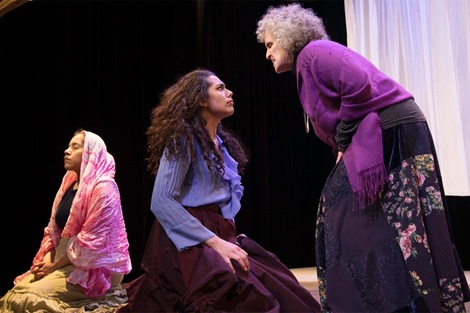 WHEN: April 21 to 30; Fridays, April 21 and 28 at 8 p.m.; Saturdays, April 22 and 29 at 8 p.m., and Sundays, April 23 and 30 at 2 p.m
WHERE: Kelsey Theatre, located on the college’s West Windsor Campus, 1200 Old Trenton Road.
TICKETS: $18 for adults, $16 for seniors, and $14 for students and children.
Free parking is available next to the theater.
Tickets may be purchased online at www.kelseytheatre.net or by calling the Kelsey Box Office at 609-570-3333.
For a complete listing of adult and children's events, visit the Kelsey webpage or call the box office for a brochure.

The Academic Theatre and Dance program at Mercer County Community College (MCCC) will combine storytelling, dance and music in the spell-binding production Blood Wedding. Wildly popular in its day and still performed regularly in Latin countries, this Spanish classic comes to Kelsey Theatre.

Written by Federico Garcia Lorca, Blood Wedding premiered in Madrid in 1933 and was an overnight sensation. It was performed around the world, including on Broadway. Incorporating song, chant, poetry, music, and rhythm, with action and sets that are highly symbolic and stylized, the show explores universal themes of love and death, family bonds and rigid societal laws that can lead to tragedy.

“Lorca wrote the play wanting to create a hit, and it was,” said Jody Gazenbeek-Person, the production’s producer and choreographer, and coordinator of the Theatre and Dance program. “It is a highly theatrical production that is emotional, thought-provoking and entertaining.”

Gazenbeek-Person notes that the cast includes not only MCCC students, but other Mercer County actors. “Many people came out to audition, specifically because they had always dreamed of performing a role in this particular play,” he said. “Blood Wedding is a highly regarded and much loved play,” he said.

Reflecting the play’s universal appeal, the production will feature a diverse cast and many different accents. “Especially in our choreography, we have absorbed elements from many of the original productions, including those performed in Madrid, Buenos Aires, Mexico, Paris, and more,” Gazenbeek-Person said.

The cast of includes Marissa Edwards of Lawrenceville as the Bride; Chris Ryan of Trenton as the Bridegroom; Sari Ruskin of Princeton as the Bridegroom’s Mother; Dan Fowler of Flemington as Father of the Bride; Charles Acosta of Levittown, Pa., as Leonardo; Jessica Klatskin of East Windsor as Leonardo’s wife; Meaghan Lukacs of Robbinsville as Leonardo’s Mother-in-Law; Madelyn Morrison Lichtman of Monroe Township as The Neighbor; Kimberly King of Mercerville as the Beggar Woman/Death; Sonia Perez of Princeton as The Maid; and Max Lobben of Lawrenceville as The Moon.