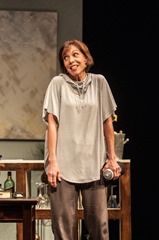 WHEN: through May 7; Fridays & Saturdays 8 PM; Sundays 2 PM; Thursdays, April 27, 7:30 pm (featuring a conversation with the cast and crew); May 4, 2:00 pm (audio described performance); Saturday, May 6, 2:00 pm
WHERE: Bickford Theatre at 6 Normandy Heights Road in Morristown
TICKETS: $45 for the General Public; $40 for Seniors; $38 for Museum Members; and $20 for Students (18 & under or with valid college ID). Group rates are available. The show contains adult language and adult situations so is not suitable for anyone under the age of 18.
Tickets may be purchased online at morrismuseum.org, by phone at (973) 971-3706, or in person at the Bickford Theatre Box Office. The Morris Museum’s Bickford Theatre is located at 6 Normandy Heights Road in Morristown, NJ, and offers free parking and full accessibility. Box office hours for phone sales are Monday through Friday, 10:00 am to 5:00 pm. Walk-up hours are Tuesday through Friday, 11:00 am to 5:00 pm.

A mother always knows when something is wrong. Billy is distracted, under pressure, and off his game. Will the unanticipated outcome of his mother’s persistent delving send him further off-kilter? Secrets are exposed and clever little lies are crafted when a confidence shared between father and son escalates into an unexpected family disclosure that could change everything. Shattering and hilarious, Clever Little Lies is a story of long-term love and marriage…for better…and for worse.

Jaclyn Layman of the Broadway World, the largest theater publication on the Internet, wrote that she loves “to see a big ticket Broadway show just as much as the next person” but she also “sees the immense importance in patronizing local arts. Especially if a show of this quality is right down the street!” She encourages theater-lovers to “get there early and enjoy a fresh spring evening on the beautiful Morris Museum grounds.”

Playwright Joe DiPietro, a Tony Award-winner for the musical Memphis and the author of the long-running comedy I Love You, You’re Perfect, Now Change, has been most often compared to Neil Simon. He writes rapid-fire comic dialogue of which there is plenty in Clever Little Lies which the New York Times called “good old-fashioned comfort food for theatregoers … with maybe just a hint of sting.”

The cast of professional actors in this production will be familiar to New Jersey audiences. Reprising the role of Alice, made famous by Marlo Thomas, is Summit resident Harriett Trangucci who has previously appeared on the Bickford stage in It Had To Be You, Breakfast with Les & Bess, and Our Town. A regular at the Dreamcatcher Repertory Theatre, she has appeared on their stage in several productions, including The Neighborhood. Her other regional and New York credits include shows at the New York Fringe Festival and at The Theater Project. The Star-Ledger named her best featured actress for her role in The Skin of Our Teeth.

The besieged young couple features Rachel Matusewicz of Randolph as Jane and Ohio native Ben Kaufman as Billy. Matusewicz, who is a graduate of the Randolph High School, has appeared with the Shakespeare Theatre of New Jersey, Luna Stage and the Hudson Shakespeare Company. Kaufman, who plays her restless husband Billy, has been seen at New York City’s The Flea Theatre as well as New Jersey theaters Dreamcatcher Rep and 12 Miles West.

Bill Sr., Alice’s more subdued husband, brings Mendham’s Bob Mackasek to the Bickford stage for the first time, but he is no stranger to New Jersey’s regional theaters. Mackasek has appeared in productions at Two River Theatre Company, the Chatham Playhouse, the Barn Theatre, the Princeton Festival, and the Summit Playhouse.

Artistic Director Eric Hafen has more than 25 years theater experience having acted in and directed productions throughout New York, New England and New Jersey, including works off-Broadway and in New Jersey. About Clever Little Lies, he says, “When I saw the show several years ago, I knew it was perfect for our Bickford Theatre audiences, witty, fun and touching. I’m particularly looking forward to Chat Night on Thursday, April 27, when the audience gets to speak with the cast and crew after the show. It is always a great evening.”