JHMOMC TO HOST TALK ON “LINCOLN & THE JEWS” IN FREEHOLD 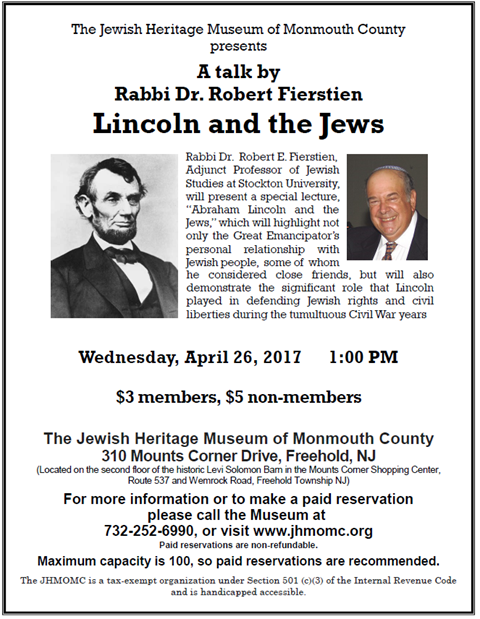 Abraham Lincoln and The Jews
A Lecture by Rabbi Dr. Robert E. Fierstien

WHEN: Wednesday, April 26, 2017, at 1:00 p.m.
WHERE: The Jewish Heritage Museum is located in the Mounts Corner Shopping Center, at 310 Mounts Corner Drive Freehold, NJ, at the corner of Route 537 and Wemrock Road (between the CentraState Medical Center and Freehold Raceway Mall). It is on the second floor of the historic Levi Solomon Barn.
TICKETS: $3 for members, $5 for non-members and students are free.

The Jewish Heritage Museum of Monmouth County will present a special lecture, “Abraham Lincoln and the Jews,” by Rabbi Dr. Robert Fierstien of Stockton University, which will highlight not only the Great Emancipator’s personal relationship with the Jewish people, some of whom he considered close friends, but will also demonstrate the significant role that Lincoln played in defending Jewish rights and civil rights during the tumultuous Civil War years.

Most people would agree that two of the greatest American Presidents were George Washington and Abraham Lincoln. While Washington had very limited—though highly significant—contacts with the small Revolutionary-era Jewish community, Lincoln throughout his adult life had extensive contacts with Jewish people, for the American Jewish community numbered some 150,000 people at the time of the Civil War.

With the recent commemoration of the 150th anniversary of the Civil War, there has been much attention paid to the subject of Lincoln and the Jews, especially in the works of historians such as Jonathan Sarna and Gary Zola, and this topic was the subject of a recent exhibit at the New York Historical Society. Professor Fierstein’s unique area of expertise as an historian of 19th century American Jewish History, and his talk, promises to be fascinating and informative for all.

For more information or to make a reservation (non-refundable), call the Museum at 732-252-6990, or visit www.jhmomc.org.  The JHMOMC is a tax-exempt organization under Section 501 (c)(3) of the Internal Revenue Code and is handicapped accessible.