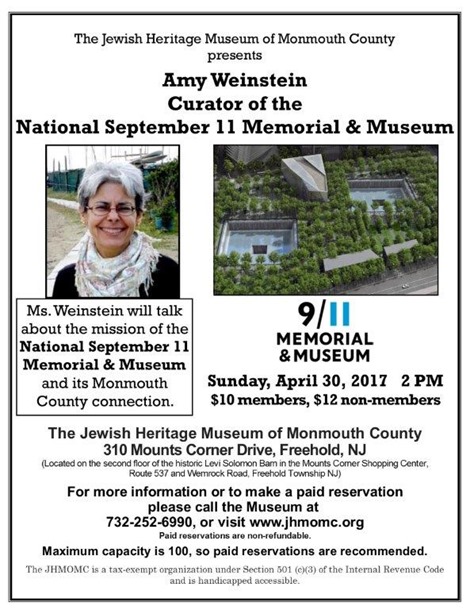 WHEN: Sunday, April 30th, at 2:00 p.m.
WHERE: The Jewish Heritage Museum is located in the Mounts Corner Shopping Center, at 310 Mounts Corner Drive Freehold, NJ, at the corner of Route 537 and Wemrock Road (between the CentraState Medical Center and Freehold Raceway Mall). It is on the second floor of the historic Levi Solomon Barn.
ADMISSION: $10 for members and $12 non-members.

Ms. Weinstein will speak about her work at the Museum, focusing on stories and artifacts that relate to New Jersey residents and to Jewish victims and responders of the attack at the World Trade Center.

Amy Weinstein is Senior Oral Historian and Director of Collections at the 9/11 Memorial & Museum. She records oral histories of first responders, recovery workers, survivors, 9/11 family members, journalists, caregivers, and others affected by the terrorist attacks.

Her responsibilities also include the acquisition of artifacts for the Museum. Most recently she co-curated Hope at Ground Zero, an exhibition of photographs by FEMA photographer Andrea Booher. Ms. Weinstein was an active participant in the Museum’s planning process. She holds a Master’s Degree in the History of Decorative Arts from the Cooper Hewitt/National Design Museum/Smithsonian Institution. Museum work is a second career for Ms. Weinstein, who worked as an attorney practicing in the fields of financial services and government relations, after graduating from Brooklyn Law School. Born in Brooklyn, New York, Ms.

The Memorial’s twin reflecting pools are each nearly an acre in size and feature the largest manmade waterfalls in North America. The pools sit within the footprints where the Twin Towers once stood. Architect Michael Arad and landscape architect Peter Walker created the Memorial design. They were selected from a global design competition that included more than 5,200 entries from 63 nations.

The names of every person who died in the 2001 and 1993 attacks are inscribed into bronze panels that edge the Memorial pools, a powerful reminder of the largest loss of life resulting from a foreign attack on American soil and the greatest single loss of rescue personnel in American history.

In a phone interview, when asked about how her Jewish background may influence her work at the Museum, Weinstein noted that her commitment extends to all who were affected by the attack, regardless of their faith. She further explained that in the process of collecting stories and artifacts from individuals of diverse backgrounds, she has learned about other faiths’ traditions. In particular, she noted prayer cards and rosary beads donated to the Museum. She came to appreciate the value of religious and secular mourning rituals and how they might help those grieving the loss of loved ones. For Weinstein, helping to bring the 9-11stories to the public is a creative, life-affirming act.

For more information or to make a reservation (non-refundable), call the Museum at 732-252-6990, or visit www.jhmomc.org.  The JHMOMC is a tax-exempt organization under Section 501 (c)(3) of the Internal Revenue Code and is handicapped accessible.