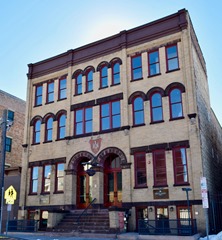 WHEN: May 5th at 4:30pm– 9:30pm
WHERE:
ADMISSION: free
Free hors d’oeuvres and a cash bar will be available.
The performances and music are free and open to the public, but because of the anticipated crowd, people are requested to RSVP at www.wehjc.com.

After a very extensive overhaul and restoration, a historic theater is back in business in Jersey City, much to the delight of audiences throughout the New Jersey and Metro-New York region.

White Eagle Hall hosted its first performances of any kind in 40 years last month, and many upcoming shows are booked and will be announced soon. The Ribbon Cutting is both recognition that this beloved building is once again an active venue and an opportunity for the community to experience for themselves the completed restoration they’ve heard so much about.

“White Eagle Hall was famous for many events and known not just among the community of Jersey City, but by people from the entire region,” said Ben LoPiccolo, CEO, the Ben LoPiccolo Development Group (BLDG). “As we officially open the doors again for White Eagle Hall, we want to welcome back everybody who knew and loved this beautiful theater. White Eagle Hall served the community as a public assembly facility and performance space for more than a century. Now with its restoration completed, White Eagle Hall once again will entertain audiences for generations to come.”

White Eagle Hall opened in 1910, constructed by Polish immigrants as a theater and public assembly facility, hosting recitals, concerts, theater productions, sporting exhibitions and other community events. This comprehensive restoration – which followed sustainable building standards – by BLDG brought back to life the original luster of this historical theater while adding the latest in sound and lighting technology as well as audience amenities.

In addition to the mayor and other leaders of the Jersey City community, on hand for the festivities will be Olga Levina, Artistic Director of JCTC, who will present theater, dance and other performances at White Eagle Hall, and Heath Miller of Excess dB Entertainment, who is the Music Talent Buyer for the venue.

“White Eagle Hall enables JCTC to expand our programming, showing the diversity of region while also bringing national and international artists to Jersey City,” said Levina. “With Merseles Studios right next door to the large stage of the beautiful White Eagle Hall, we are not only continuing the conversation that theater and the arts is having with audiences, but we can take it to the next level.”

“My goal for White Eagle Hall is to serve the entire local music community and work with a variety of genres,” said Miller. “It’s important that it’s a place that everyone has a reason to go to. Ben and his team have done an amazing job in preserving the history of the building while modernizing it.”

White Eagle Hall has a capacity of 400 seated/800 standing and features a balcony level flanks the inner perimeter of the hall. The 15,000-square-foot spaces 28.-foot high ceilings; 25-foot proscenium stage that is 30-foot wide x 25-foot deep. with two levels of back-stage areas. White Eagle Hall boasts two bars on the mezzanine level and one on the balcony and also serves food.

“Since the beginning of our administration, we placed an emphasis on growing the arts and culture in Jersey City,” - said Mayor Fulop. “With the opening of the majestic White Eagle Hall, we have an opportunity to marry the past with the present as an historic venue is brought back to life, offering additional ways to showcase our cultural scene to residents and visitors alike.”

White Eagle Hall now begins a new chapter for music, theater and the performing arts in the New Jersey/New York area. Please join us as we celebrate this chapter together.