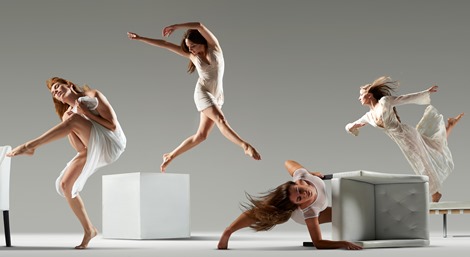 The Moving Architects, a female-centric dance company known for dance works celebrating feminine strength and depicting an authentic complexity of both the current and historically lived female experience, has performed throughout the U.S., as well as internationally, including Morocco and Guatemala and performance/teaching tours to Tajikistan and Kyrgyzstan (with the US Department of State).

“Anthology” – a collection of four separate pieces – explores different “eras of disruption and how individuals, relationships, and communities manage and overcome these challenging times,” said Erin Carlisle Norton, founder of The Moving Architects.

Disruption, like other JCTC series, features multiple art-forms, dance, readings, theater, visual arts and other performances that examine a topic global in scope yet relevant to the community. Disruption prompted Norton to create the “Anthology” pieces as well as a fitting commemoration of the company’s 10th anniversary season.

“Disruption is a concept that is naturally imbedded in all of my choreographic work,” said Norton. “What we plan or hope for is often disrupted by individual will or outside forces, leaving us to find new ways to cope, communicate, and make choices for how to move forward. My work also often draws from various time periods for inspiration. By looking back at different eras, we see how cultural and political shifts in the country shape and disrupt lives, creating a context in which to experience dance being performed on stage.”

The “Anthology” quartet features: The Groove, a buzzing sound score accompanies the portrayal of members in a trusting yet aggressive community trying to connect; The Jam, a group-dance with a mod, swinging 60s flair. performed to a surf & psychedelic rock soundtrack, depicts this turbulent historical period through the extremes of its pop culture, which promoted both mirth and oblivion; 10, an autobiographical solo performance by Norton with a sound-score of her own narration reflecting on her decade long experience of running a dance company; and Americana, a meditation on the struggles of the American family during Great Depression –includes a video collaboration with Gwen Charles.

The JCTC presentation of “Anthology” is the debut performance. The show is booked to be performed at various showcases and events in 2017, including The Tank in New York City at the end of April.

“JCTC is very excited to present The Moving Architects and their show, “Anthology,” which was developed for Disruption,” said Olga Levina, Artistic Director, JCTC. “We are also proud that we can help celebrate this amazing dance company’s 10th anniversary by bringing “Anthology” to Jersey City audiences.”

Formed in 2007 in Chicago, The Moving Architects relocated to NJ/NYC in 2013. The company performs regionally, nationally, and internationally, and produces the dance podcast: Movers & Shapers: A Dance Podcast, which has received support from the NJ Council for the Humanities. The Moving Architects have been hailed as “… precision-dependent choreography (brilliantly tense, unpredictable and specific…) Time Out/Chicago. The JCTC presentation of “Anthology”

Norton, a choreographer, dancer and movement educator, earned a BFA and MFA in Dance from The Ohio State University, a Graduate-level Laban Certificate in Movement Analysis from Columbia College Chicago and is a Certified Pilates and Barre Instructor. In addition to performing in dozens of traditional and unconventional venues including: Dixon Place, Ailey Citigroup Theater, Montclair Art Museum, South Orange Performing Arts Center, Gibney Dance, and Chicago’s Links Hall, she has received numerous awards, residencies, and grants, including a Fellowship in Choreography from the New Jersey State Council on the Arts .

Funding for Disruption and “Anthology” was made possible by generous support from the Hudson County Office of Cultural & Heritage Affairs/Tourism Development, Thomas A. DeGise, Hudson County Executive and the Hudson County Board of Chosen Freeholders and the New Jersey State Council on the Arts.

Funding for Disruption and “Anthology” was also made possible through the generosity of Ben LoPiccolo Development Group, JCTC’s Board of Directors, private donors and local Jersey City businesses.