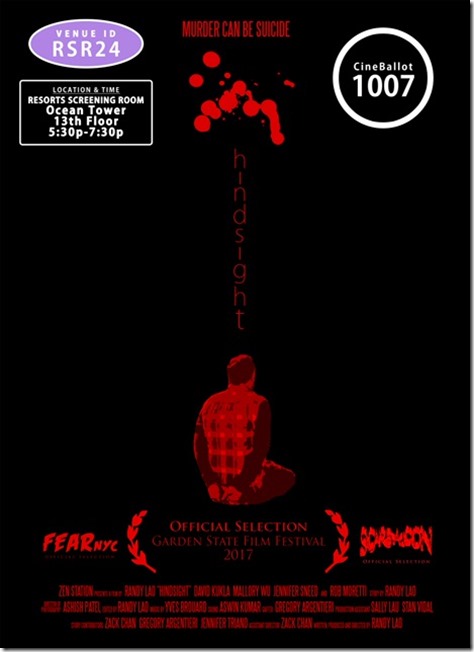 Randy Lao’s short film Hindsight is screening this weekend during the 15th Annual Garden State Film Festival in Atlantic City. The 28-minute film focuses on a tormented and suicidal man that has the ability to see horrific visions. A riveting story unfolds as the unique individual lures a murderer for his own demise. Hindsight is a must-see in the festival lineup. Director Randy Lao keeps you on the edge of your seat. There are many moments where Hindsight leaves the viewer breathless.

"We are thrilled to have been accepted to be a part of the Garden State Film Festival," said Randy Lao, director and producer of Hindsight. "I'm very excited to have the opportunity to share this short among the filmmaker communities. I'm very proud of our diverse cast and crew, I wouldn't have been able to do it without their talents and dedication. As this film explores the complexities of suicidal behaviors, I hope the dark nature of the short will open further discussions on the topic of suicide and the conflicts it imposes on humanity."

About Randy Lao
Randy is an aspired filmmaker and an avid daydreamer. While he loves films of all genres, he tends to gravitate towards the dark side of things. His first attempt at directing and editing at the Asian American Film Lab 72 hours challenge earned him a nomination for best short and best editor. His 5-hour energy drink commercial was one of the top finalists for the company's crowdfunding campaign. His pursuit of the arts and creative collaborations is what drives him as a person. Randy currently resides in Highland Lakes, New Jersey.

About David Kukla
David is originally from Buffalo NY. Prior to his role in Hindsight he was recently seen on stage in the Alpha NYC Theatre Productions of "Nothing Serious" and "Send in the Ha Has". He's grateful to have performed on stages at both Madison Square Garden and off off off Broadway. Like all other actors he too wishes to one day add "Law and Order-dead hooker" to his resume.

About Mallory Wu
Mallory Ann is an ethnically ambiguous Brooklyn native with a ridiculous age range, and an all-around swell person. She has a BFA with Honors in Drama from NYU's Tisch School of the Arts, a certificate in Classic Pastry Arts from the International Culinary Center, and a great head of hair. Mallory currently resides in New York City.

About Rob Moretti
Rob Moretti began acting at the age of 14.  Within two years of studying his craft, he landed a co-starring role in his first feature film entitled "House on Tombstone Hill."  Not long after he landed other roles in both mainstream and indie films such as "Quiet Winter", "Scenes From A Mall" and "The Beat." In 1994 he created his own production company in an effort to make his first film.  During the process, Rob produced a number of features and short films.  His directorial debut "Crutch" landed in the Top 50 DVD Rentals in 2006 and his second feature, “Truth” was released in 2014 and can be seen in over 20 countries.

About Jennifer Sneed
Jennifer has co-hosted and co-produced talk shows; starred in commercial, film and video work; appeared on television, in theater and fashion shows. The show "Writers2Writers", the short film "The Florist", and the "4th Annual New Jersey One-Minute Play Festival" are among some of her past projects. When not on a set or stage, she works in planning and public affairs. Jennifer is the former deputy state director for U.S. Senator Frank R. Lautenberg. She holds a B.A. from Rutgers University in Journalism & Mass Media, Political Science and Communications. Jennifer remains passionate about the arts and currently resides in Newark, New Jersey.