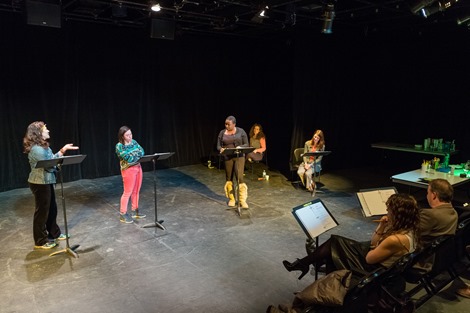 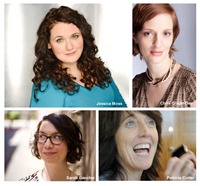 This year’s readings will feature the following finalists: Foster Mom by Chris Cragin-Day, a founding member of Firebone Theatre and alumna of The Public Theater’s Emerging Writers Group; Cam Baby by Jessica Moss, a Canadian Comedy Award nominee and a Lila Acheson Wallace Playwriting Fellow at The Juilliard School in New York; 1980 (Or Why I’m Voting For John Anderson) by Patricia Cotter, an Emmy Award-winning writer for Comedy Central’s Win Ben Stein's Money and recipient of the American Academy of Arts & Letters Richard Rodgers Award for Musical Theater; and Seder by Sarah Gancher, whose recent projects include Hundred Days at The Public Theater’s Under the Radar Festival and commissions for Ars Nova and Second City Theatricals. One new play will be read by professional actors at each performance, and the public is encouraged to actively participate in the new play development process through post-reading dialogues with the writers and written evaluations.

The Premiere Stages Play Festival is an annual competition for unproduced scripts that offers developmental opportunities to playwrights with a connection to the greater metropolitan area (New Jersey, New York, Pennsylvania, and Connecticut). Four finalist plays are selected from approximately 400 submissions, given professional readings, and considered for expanded development as part of Premiere Stages’ 2017 Season. One of the four plays will be selected for an Actors’ Equity Association (AEA) staged reading in June, and the most promising play will be awarded a fully produced AEA production in September. All of the finalists also receive cash awards ranging from $500 to $2,000.

The Festival has become one of America’s leading programs for new play development, with a focus on social issues that afford opportunities for collaboration and engagement with local communities. Numerous plays developed through the Festival have been subsequently published, produced and honored by the American Theatre Critics Association.

The schedule for the March events is as follows:

Foster Mom
by Chris Cragin-Day
WHEN: Thursday, March 9, at 7 p.m.
Leslie’s decision to adopt a child is complicated by two factors: a skeptical mother and an unexpected romance. As the relationship with the new man intensifies, so does her conviction about foster parenting. In the end, Leslie must choose between two things she wants desperately: the love of her life and the foster child she's never met.

Cam Baby
by Jessica Moss
WHEN: Friday, March 10, at 7 p.m.
Matabang and Joseph are secretly webcamming girls and sharing the footage with the Brobonic Union, their secret society of friends. When they rent a room to Clara, who fails to live up to their beauty standards, the operation is in jeopardy until Clara starts dating Tim and suddenly everyone wants to watch. Touching on issues of privacy, consent, identity, and the value of women, Cam Baby is a highly topical and fast-paced ensemble comedy about the selves we create and the stories we watch.

1980 (Or Why I’m Voting For John Anderson)
by Patricia Cotter
WHEN: Saturday, March 11, at 7 p.m.
In a country hungry for a new voice, an inspiring, independent contender emerges for President. Four very different (and slightly lost) campaign workers advocate tirelessly for their long-shot candidate, convinced he can change their country and their lives. 1980 (Or Why I’m Voting For John Anderson) is a contemporary comedy about class, race and the politics of hope.

Seder
by Sarah Gancher
WHEN: Sunday, March 12, at 3 p.m.
In Hungary, retired KGB typist Erzsike comes face-to-face with her own photograph on a museum’s Wall of Murderers—and learns her estranged daughter put it there. The incident fuels a contentious Seder, where deep family secrets call into question a mother’s morality, honor, and sacrifice. Inspired by a true story.

“These are four compelling and thought-provoking new plays, each very unique in style and theme," stated John J. Wooten, producing artistic director of Premiere Stages. “And given that two of the four will continue to be developed as part of our 2017 season, I am very intrigued by how the plays will resonate with our patrons.”

This year’s finalists were selected by Premiere Stages staff in partnership with panelists May Adrales, Kia Corthron, Vincent Delaney, William Eddy, Rachel Hutt, Lysna Marzani, Carole Shaffer-Koros, and Ernest Wiggins. The following semifinalists were also honored in this year’s competition: Honor Killing by Sarah Bierstock, The Niceties by Eleanor Burgess, Heartland by Gabriel Jason Dean, Hype Man by Idris Goodwin, Motherland by Allison Gregory, Sam & Lizzie by Emily Kaczmarek, Stop-Motion by Liz Kerin, The Chemist by Larry Leinoff, Everything is Wonderful by Chelsea Marcantel, Ends of the Earth by Lia Romeo, Death of a Driver by Will Snider, Gifted and Talented by Mara Sokol, Stewart & Lamb by James Anthony Tyler, and Tectonic Mélange by Deborah Yarchun.

Premiere’s 13th Annual Spring Reading Series is part of The New Jersey Theatre Alliance’s Stages Festival, which offers dozens of performances, workshops, classes, and events at the state’s professional theatres, performing arts centers, libraries, schools, senior centers, and other community venues. The program was developed to encourage New Jersey’s residents to attend their local professional theatres by making the experience affordable, accessible, and fun. Since its inception 20 years ago, the program has served over 190,000 people. The Stages Festival is made possible in part by funds from the New Jersey State Council on the Arts, a Partner Agency of the National Endowment for the Arts; Bank of America; and The Horizon Foundation for New Jersey. Additional program support has been provided by The Smart Family Foundation, The Geraldine R. Dodge Foundation, F.M. Kirby Foundation, and PSEG Foundation. For more information on the Stages Festival, please visit www.njtheatrealliance.org or www.stagesfestival.org.

Premiere Stages is also made possible in part through funding from The New Jersey State Council on the Arts, The Shubert Foundation, The Geraldine R. Dodge Foundation, The Northfield Bank Foundation, The Wallerstein Foundation for Geriatric Life Improvement, The Hyde and Watson Foundation, The Union Foundation, E.J. Grassmann Trust, The New Jersey Theatre Alliance’s Stages Festival and through the generous support of individual patrons. Discover Jersey Arts is our marketing partner. Visit www.JerseyArts.com for more information about other arts programming happening around the Garden State.

Founded in 1855, Kean University has become one of the largest metropolitan institutions of higher education in the region, with a richly diverse student, faculty and staff population. Kean continues to play a key role in the training of teachers and is a hub of educational, technological and cultural enrichment serving nearly 15,000 students. The Nathan Weiss Graduate College offers four doctorate degree programs and more than 60 options for graduate study leading to master’s degrees, professional diplomas or certifications. The University’s six undergraduate colleges offer 50 undergraduate degrees over a full range of academic subjects. With campuses in Union and Toms River, New Jersey, and Wenzhou, China, Kean University furthers its mission by providing an affordable, accessible and world-class education. Visit Kean online at www.kean.edu.

TOP: In rehearsal for Premiere's spring reading of past finalist Great Kills by Kate Cortesi. Photo by Ben Gancsos.